(I have two threads archived from the City of Heroes Market Forums that I plan to repost here in my blog, complete with comments.  Off we go!)

Here's a project that I've been planning to do for a few months:  run a character from 1 to 50 in about 30 days, and finish with a completely IO'd build.

Not much of a novelty in the days of "self-PL your brute to 50 in hours" guides, but for my goal is more to show that a solid IO build is just as easy to pull together as is getting to 50.  (And that may not be much of a revelation either, but after all, there are probably people out there who still haven't investigated an IO build because it's complicated and expensive.

(Which is why I'm posting it here... it's more an exercise in leveraging the market to a nice build by level 50.)

Just to be perverse, I'm going to do this without ever setting foot in AE and do it on a character called AE Baby.  (I've had that name on Virtue for several months now.)  To be doubly perverse, I've come up with a reasonably workable backstory to explain the name.  Yes, you can roleplay a character named AE Baby if you want to!  ^_^

Restrictions:  No AE.  No borrowing money from any other character.  The whole point is to show that anyone can manage this, starting from nothing.

Day One:  I should have started August 1st, but anyway... I spent most of the day at work looking into Mind/Psi doms, which I believed my AE Baby character was, and then decided to make a Plant/Fire Dom instead.  I spent a couple of hours working out a build that was perma-Dom, smashing/lethal softcapped, and did not include too many expensive IOs that I couldn't manage to collect them all in 30 days.

And... then I logged in AE Baby and discovered that she was, in fact, a fire/kin Corr.  Oops.  And I like the idea of a fire/kin corr, so I tossed the plant/fire build out the window.  I'll work on a build later.

Ran both of Kalinda's arcs and the first Mongoose arc, all solo.  Collected all of the Mercy Island explore badges.  Along with the 5, 6, and 7 merits I get from vet rewards, that netted me 37 merits right off the bat.

Hit level 7, moved to Port Oakes, sold my two starting inspirations, and then began the process of buying up recipes cheaply on the market and vendoring them to raise capital.

So much easier to do with /auctionhouse.  :D

With about 2.5 million in capital raised, I placed a lowball bid on a stack of 10 of one of my current favorite recipes to craft and sell... I can buy the recipe for as little as 5,000, and the crafted recipe sells for around 10 million.  That's a good place for me to start.  ^_^ 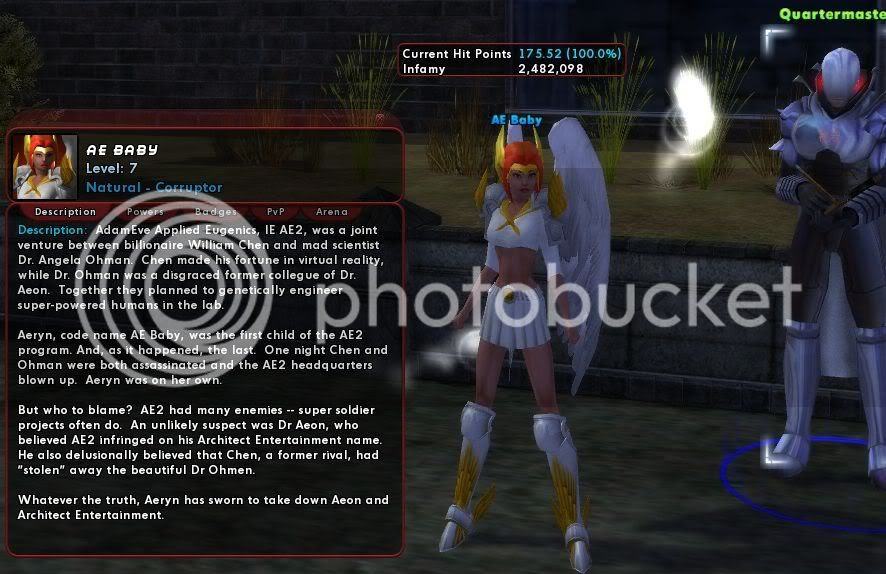