Last day of my experiment!

I checked the market early in the morning before work.  My 2nd KC triple also sold for 170 million, just as I'd hoped, and one of the Decimations had sold.

I was able to pick up the common salvage pretty easily and craft everything. 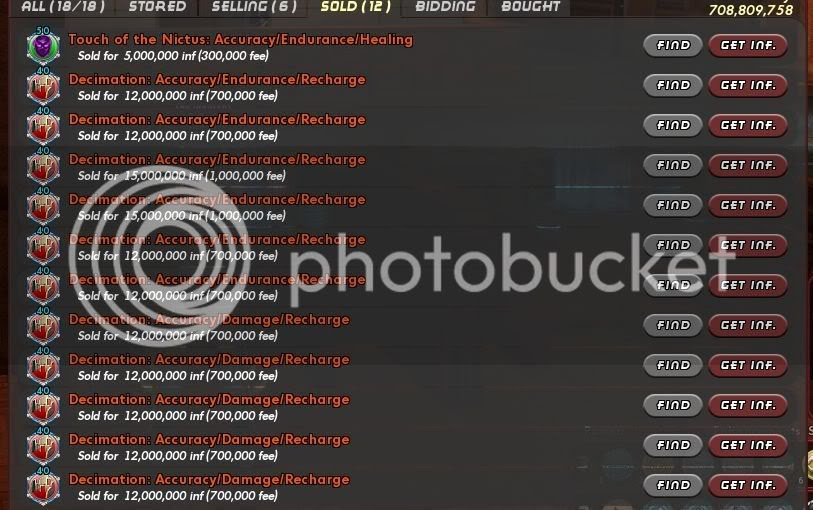 When I got home, a lot of stuff had sold.

I converted 50 merits and bought a third KC triple, and crafted and listed it for sale, along with the rest of the Decimation acc/dam/rech IOs that I hadn't been able to list this morning.

By the time I was done in the evening, several of my Decimations had sold and also my third KC triple, again for 170 million.  Nice.  :D  (I'd also listed this for 158 million).

I had two more Decimation sales after this screenshot.  At the moment I have the two Eradication damage IOs for sale, the Thunderstrike, and I think three of the Decimation acc/end/rech IOs still for sale.  All of the acc/dam/rech sold already! 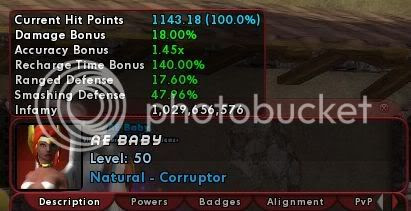 In the end I have T3 Destiny, Lore, and Judgment, but only T2 Interface and T1 Alpha.  I ran too many trials the last week and not enough regular content, so very few shard drops.

Although I benefited from from the two purple drops to the tune of a bit over a billion infamy, I finished with over a billion infamy anyway.  So I raised enough money even without the purples to pay for my build, although I might have had to wait a few more days to purchase those Enzymes.  A large part of the money I made in the last few days came from the sale of three Kinetic Combat triples that I bought with a-merits, but I also made nearly as much in the same time span just buying recipes, crafting them, and selling the IOs.

I still have 83 merits on hand as well.

For comparison, the CEBR brute that I've been working on since Aug 17th is up to nearly 900 million infamy from AE recipe rolls that I craft and sell (mostly  low level bronze rolls).  This character doesn't have a nice build yet, but I wanted to show that making money from AE tickets is also a fast way to earn cash.

Probably a balance of the three approaches would work best.  Either way, it's not hard to make money in this game.  ^_^