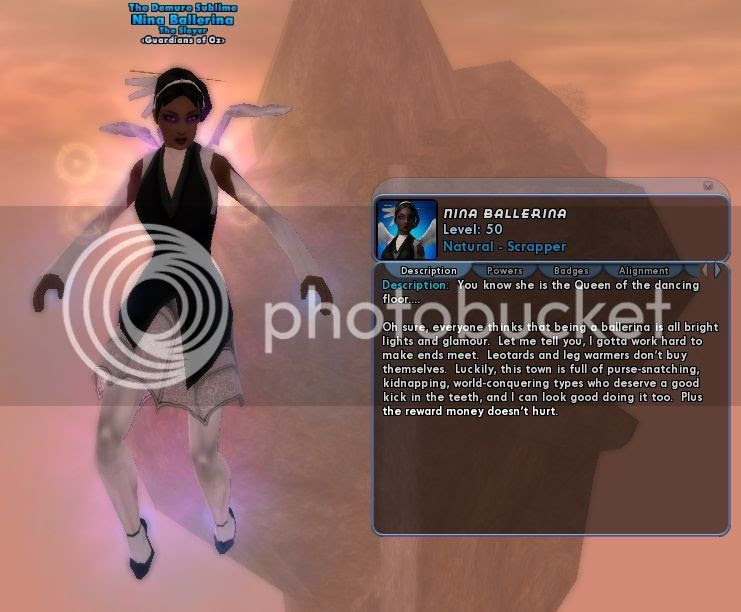 So I had this dilemma -- I was really enjoying playing Tiffany Blackheart, really getting into the whole martial arts thing, but a double experience weekend was around the corner and I didn't want to outlevel my contacts.  But I still wanted to play my martial arts scrapper.  What to do?

As it turned out, I had a martial arts scrapper on Freedom that I liked who was already about level 26.  Her name was Ballet Dancer.  The whole idea of a ballerina high-kicking bad guys really appealed to me and fit with how most of martial arts looked.  But, of course, I wanted to play with friends on Virtue, so why not make a Ballet Dancer there and play her up?

The name was taken, but that was okay, I had a backup plan:  Nina Ballerina, from an old song by ABBA Nina, Pretty Ballerina  (warning:  very early ABBA).  Ultimately I think this is a better name anyway.

Nina made to to 50 before Tiffany did I think, and then took a back seat to other characters for a while,  But  ultimately I gave her a really tough build and she became one of my favorite scrappers, and my go-to girl for Hami raids because she was willpower and could fly.  (Tiffany could fly too, but had superspeed as well and for some reason I thought of her as the one that superspeeds instead of flies).  Both were martial arts / willpower with nearly identical builds, but they looked very different and that was enough for me.

I took Nina on Hami raids right up until the end of the game -- on the very last day in fact.  Several of her costumes were white tights with a colored leotard, but those were simple costumes and I tended to prefer the more complex ones like her gothic lolita look above.
Posted by Miko at 2:03 PM