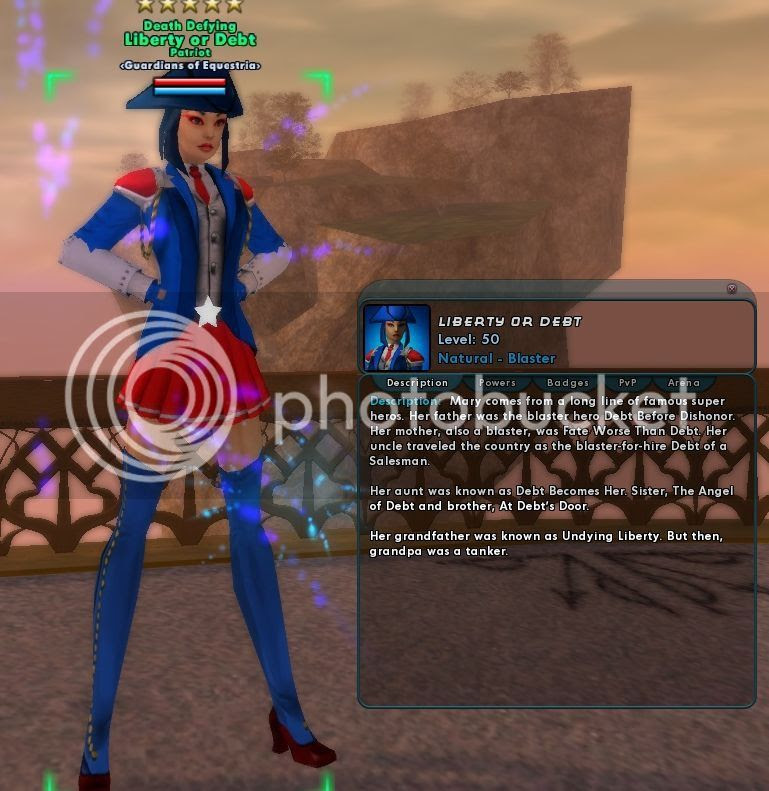 There was a time when I had plans to level up several blasters, one of each set that seemed worthwhile.  I had Serpentine Fire who I got to 50, I had Mouse Police on Freedom, an ice/ice blaster and one of my earliest characters who I got up to 42, I had an arrow blaster named Headless Horsewoman (who used the pumpkinhead costume piece), and I had Liberty or Debt, which seemed like such a perfect name for a patriotic blaster that I was always very proud of it.  She was energy / energy, the bane of melee, although I ried to handle it correctly and knock down from above or knock back into walls.

All of these characters were on Freedom, but I eventually moved the highest three to Virtue (and then Serpentine Fire got shipped off to Union to make room for a new character).  Liberty or Debt reached 43 on Freedom, and then didn't progress very much at all on Virtue.  I just didn't play blasters that much, after my initial Freedom love affair with them.

But I spent one day of my last three months powerleveling Liberty or Debt up to 50.  I think I only played her once or twice after, but still, it was worth it.  She was my third and final level 50 blaster -- I would have liked to PL Blaster Girl One/Mouse Police (Freedom) to 50 as well, but alas, no time.

Still like this character though.  The port of the gunslinger jacket to females and the release of the tricorner hat just made it possible to like her even more, as the above costume was clearly superior to her others.