Cinder_Flux
Aww sorry about that ITF, I wish I had seen you on before we formed ours.

We did a kill all for the 1st and 2nd mish and just walked to the the end on the 3rd and 4th, killing as we went.
It only took just about 1hr and I went from 47 to 49 and there were at least 2 purple drops for the team.

Then I did a Manti and it started badly with the leader at lvl 32 so the mobs were +3.
It took them 30 mins into the first mish to listen to me to quit and reform with me as the leader. They were worried that it would take to long that the TF would last 90 to 120 min.

Heh with me plowing through as the leader we finished in 54 min. And I hit 50 along the way, makes 8 on virtue now.

I didn't mind the ITF, it was just... slow.  But by the book, and we succeeded, so in the end I had no other complaints, aside from the mission reset bug.  Which I can probably blame on the scrapper who quit.  :D

This morning I ran Ghost Widow's patron arc and opened up the patron pools for myself.  That netted me 10 merits, and 5 more for the explore badges in Nerva.  I also hit level 43 on completion of the arc, which was nice.

I'm still soloing at -1/1, but it's quite easy.  With fulcrum shift and Siphon Power I can sometimes boost my damage bonus over 250%, and things die very quickly.  I can heal myself and speed myself and regain endurance, all as long as I have an enemy to target.  Everything recharges quickly now, so I just mow forward.  I'm not sure how well that would work at +0 or +1 though... I'm generally spending time hitting fulcrum shift, siphon power, sipon speed, and maybe heal or  transfusion before I even attack, or before I finish the enemies off anyway... so enemies that can hit me often for big damage would be more of a problem.  But once I have softcapped smashing/lethal defense that might give me the time to self-buff before unleashing firey death, without dying before I can manage it.  (Would depend on the enemy of course.)

But the short answer is... I solo much better than my fire blaster and much better than a defender.   I like that.  I've played kin defenders, and I have a level 39 fire/kin controller, and the fire/kin corruptor is a lot more fun so far in my opinion.

I headed blueside to Striga Isle for a Moonfire Task Force a friend was running.  More merits, took about an hour, and it got me to within a few bubbles of level 44. 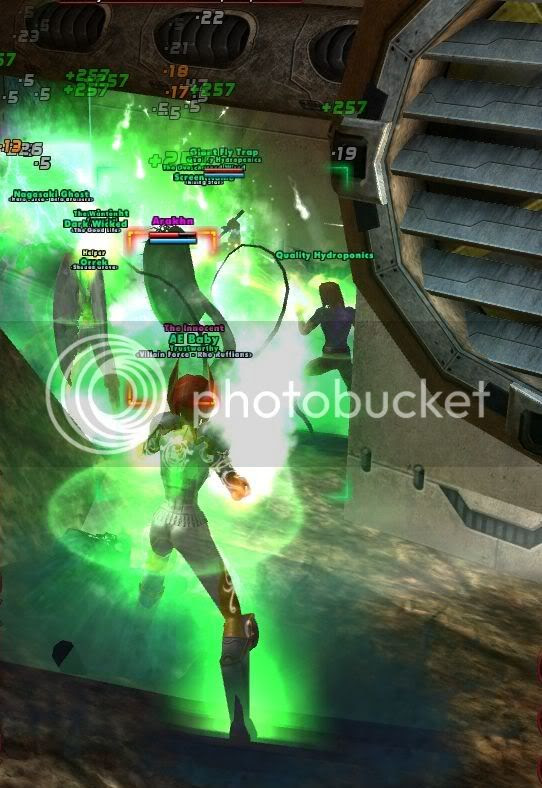 I also grabbed all the explore badges in Striga, and afterwards did the same for Peregrine Island and for the four Shadow Shard zones.  That's 30 more merits!  I'm at 444 merits now.

Market-wise, I've learned that:  A)  Prices don't necessarily double right away during DXP (they may not at all, we'll see -- some people are avoiding the market this weekend I suspect)  B)  IOs that are less popular will remain less popular (my Eradications are still not selling -- both priced to high, and not an IO that sees huge demand ever),  C)  You simply can't predict when something will become scarce enough for the price to jump up, and D)

Everyone likes endurance modification IOs.  You really can't go wrong selling those.  Therefore, I have bids in for even more Performance Shifter and Efficacy Adaptor IOs, because I can ALWAYS make money selling those.  :D

Not sure if I want to work on AE Baby tonight (end of DXP) or if I want to work on my 41 brute.  I have this brute, Shinobu Eden, super strength/invulnerability.  I originally made her to keep at level 41 just to run the Eden Trial, but I used her for that a whole one time and now that it's been fixed, I can level her up.  Plus, she's currently acting head of Hero Force - Alpha Assault, so it'd be nice to have a head that's level 50, and I've never had a level 50 Super Strength anything before.  So that's one of my other goals atm.  ^_^

After 4 pages of reading I actually took the time to read what you were saying about buying and selling. For some reason anytime something sounds like work I begin to glaze over the words until I am read blah,blah,blah. But after forcing myself to re-read some of your posts it finally was able to sink in.

My goal isn't really to say that everyone can do exactly what I'm doing... as pointed out I have some big advantages in knowledge and vet rewards, and also I play a lot.  But anyone *can* work on a nice build for their character and achieve it, using some of the same tricks.

I grabbed explore badges in Grandville and Monster Islands, then I headed to Cim to find an ITF.  I did, and it had at least one person on the team who pretty much could survive in a sea of Cimemorans, so there were one or two team wipes except for him, but everything went well.  It was a long ITF again -- this one only about 1 and 1/2 hours.  But people want to go slow and soak up the experience.

I finished at level 45, close to level 46.  I decided to switch to my brute and join another ITF.  This also went well -- my brute is softcapped to smashing/lethal, and generally it's not by much so that when I solo, a sea of Cimemorans will debuff me and kill me if I don't chew a purple now and again -- on our team we had a widow, two defenders, a corruptor, and a MM.  Several of them were contributing to my defense (the widow the most of course), so that it was always 60% to 70% and sometimes over 100%.  So I got to be main tank/brute and did very well at it.  Nothing like Invul for holding aggro, I never died, and I went from 41 to almost 44.

I was going to run some tip missions and hit 44 and call it a night, but as I ran through Talos I saw my friend advertising a Citadel.  Hmmm...  I'd sort of been thinking of getting all six legacy TFs over the weekend, and I'd managed Posi, Synapse, and Manticore.  So I switched back to AE Baby and joined the Citadel TF. 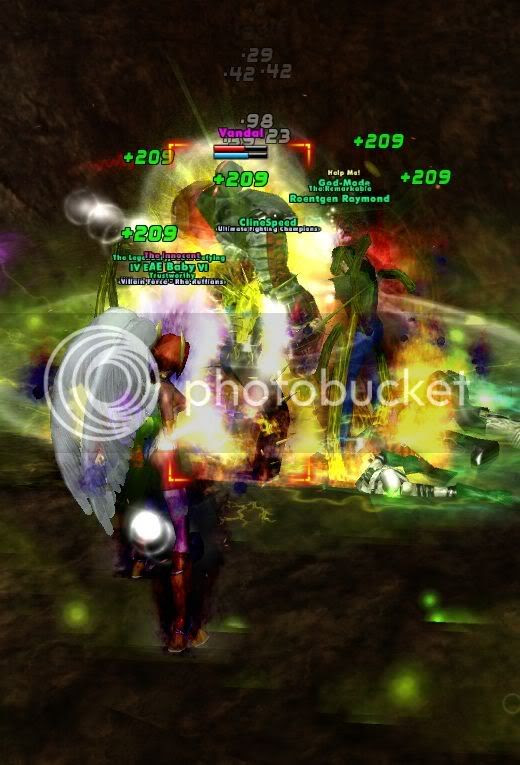 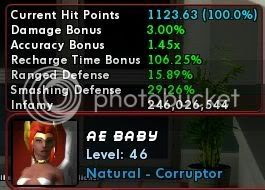 My build's slightly messed up though, since I waited until 44 to take Scorpion Shield when I really needed to take it at 41.  I'm going to need to respec to fix it.  But that can wait until 50 I suppose.

I've sold a lot more Performance Shifter end/rech IOs.  I pulled and relisted my last Gift of the Ancients defense IO and it sold for 25 million.  I sold a couple of other IOs that I crafted -- random drops.  One was a level 24 Performance Shifter endurance IO, that sold for 20 million.  I also have a Luck of Gambler level 50 defense recipe that I expect will sell very well.

I haven't decided to pull and relist the Eradication IOs just yet... I'm hoping that prices will spike after DXP weekend as people start to IO the characters they were levelling.  But that may be wishful thinking.  We'll see.

Fenrisulfr
Very nice read so far.
It seems much like what I do, except more so.

Clearly if I want to make more money on my characters, I need to sell more enhancements.
After writing the above sentence I facepalmed.

Yeah, and considering I've made almost all of my money from selling Performance Shifter end/rech and Efficacy Adaptor end/rech and end/acc IOs... it's really even less complicated than you might think.  I've bought the Performance Shifter recipes for 450,000 to 750,000 and routinely sold them for 9-12 million.  The only trick is knowing that this particular IO can be had so cheaply... which isn't hard to find out.  ^_^

So I logged in this morning, collected my sales, and like I've been doing for the last week I checked to see what was for sale on the IOs I'm trying hardest to buy.  Right now that's the Kinetic Combat triple.  Over the last week there have been virtually none available below level 35.  There was a level 24 available, but listed for higher than I was willing to buy.  (I may have bid as high as 50-60 million).  That one disappeared, but then there was a level 28 available -- also for more than 50-60 million.  Then that one disappeared.

I had a bid in for a level 22 at 32 million.  My only hope was to buy one as soon as it was listed, rather than find one for sale and pay a buy-it-now price.  So I checked this morning and saw that one level below 35 had a recipe for sale.

So I decided to abandon the plan to grab one for as cheap as possible.  I increased my bid until I bought one of the recipes listed for 65 million.  More than I would have liked to pay, but still a lot less than the level 35 sells for.  And the IO is obviously hard to come by, so I'm happy to have my mule set complete now.

Also, my LotG level 50 def recipe that dropped to me should make up for the cost when it sells.

But I knew this already, I have a 36 corruptor who's run Manti many times.