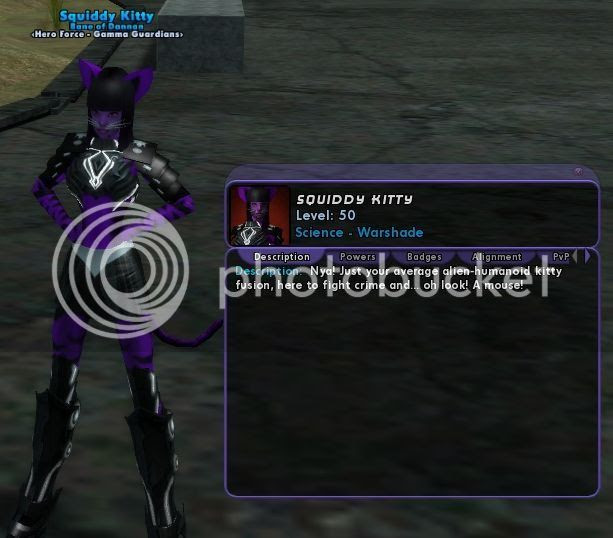 So the joke on the Marketing forums was that you weren't truly rich unless you could casually purple your warshade.  I'm not sure exactly where that idea came from, but it was an in-joke for a long time, and thus I was forced to get my own War Shade to fifty and purple her out.

Squiddy Kitty was hardly my first warshade, or even my first kitten warshade.  I had an early warshade that I got to 24 who was a member of the Legion of Catgirls, and then I had a warshade named Amber Wasp that I got up into the 30's, and one of my Mouse Police clones on another server was a war shade.  My other catgirl warshade is where I came up with the nickname "squiddy kitty" and decided it was a good main name for a War Shade.  Amber and Squiddy were on different accounts, and were always about the same level, but when it came time to choose one to take to 50, I choose squiddy.

Squiddy was therefore quite powerful, but little-played.  I moved her redside at one point, and she became a character I sometimes used when I played redside.  I took her on a few Cathedral of Pain runs, and on the final day of the game, I used Squiddy Kitty for the last completed redside hami raid ever.

When I posted to the forums about how I'd finally purpled my warshade... I was told that I had not done it "casually".  To rectify this, I held a contest where I offered to purple someone else's warshade.  The ultimate winner was Dechs Kaison, who sort of wrote the book on warshades, or one of the books anyway.  He already had a good build but I improved it, though the difference between a purpled warshade and just a very well built one isn't all that great.  I gave some things to the second and third place winners of my contest too.  I had fun with it.  ^_^

There's no question I enjoyed playing a war shade more than a peace bringer though.  My PB Holy Bell never got to 50.  I never leveled my other warshades up either; one was enough for me.
Posted by Miko at 3:12 PM