Didn't have time to do much on Saturday.  Sunday I goofed around with my brute Shinobu Hime on my third account for a bit, got her up to 37 now, and also spent time getting my level 45 brute Shinobu Eden to rogue status (on my way back to being a hero and leader of Hero Force Alpha Assault again).

I've been marketing with my 3rd account brute and I have to say, AE is still not only the fastest way to level but also the fastest way to make money starting from zero.  In four days since I created the account I'm up to about 300 million with no outside help.

Meanwhile, AE Baby is not really making any money.  I have a bunch of Eradication damage IOs that won't sell -- or at least, won't sell for the price I want to sell them for.  It confuses me a bit because there are not a lot for sale and there are about three times that many people bidding, but eh.  I'm going to have to pull them down and try something different here soon, I have 10 days to come up with the cash I need for my last few IOs and Hami-Os.

Anyway, I played AE Baby today. I joined an ITF and hit 50 fairly early into it. 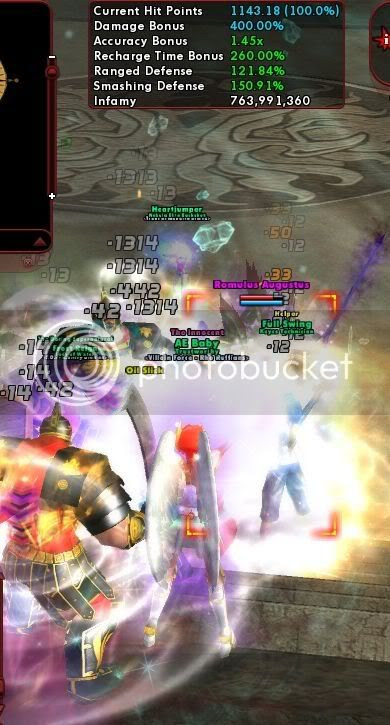 We had no real tank.  In fact, what we had were four defenders, a dom, a blaster, a crab, and me the fire/kin corr.  You want to know why 8 defenders (buffers) > 8 good soloers (scrappers/brutes/blasters etc.)?  Take a look at my numbers above -- capped at 400% damage bonus (which I was for nearly the entire task force) and smashing/lethal damage of over 150%.  Tank?  What's a tank?

Anyway having hit 50 I promptly ran my Mender Ramiel arc and opened up my Alpha slot.  I solo'd the whole thing.  Still at -1/1 mind you, but I only died once in the rikti Honoree/Holtz fight, and I was actually able to rez right there and finish off Holtz (Hero1 was already down).  I used my vet rez mind you, it has the advantage of making me invulnerable for a few moments.  But otherwise I could have run back from the Vanguard base and still finished it off.  ^_^

Point is, I can solo pretty well.

I joined a Lamda after that.  In the evening after running an ITF on my scrapper Trinkets and then a Cathedral of Pain (also on Trinkets), I went back for another incarnate trial.

Some guy who I know I've teamed with before was starting a trial.  I sent him a tell immediately saying I'd join.  I waited.  After two minutes he broadcast that he had room for six more.  I send a second tell.  I waited.  Finally, he said he was full -- never replying to my tells in any way.

Possibly he was busy and bombarded with tells, but also I wondered if he'd just decided to ignore me because of the name.  Anyway, I 1-starred him with notes explaining what had happened, just because I was annoyed.  Not like the guy had such a fantastic RP-worthy name himself.

I joined another BAF that was forming and we cleaned house, no escapees, AVs went down like clockwork.  I even was made leader of one of the teams, so no wondering if someone was reading "PL'd noob" into my silly name.  I stayed with that team for a second BAF (a little more ragged the 2nd time) and then for a Lamda. All told I got two commons, and then on the last two trials a rare and a very rare.  Haven't unlocked anything yet but I'm close. 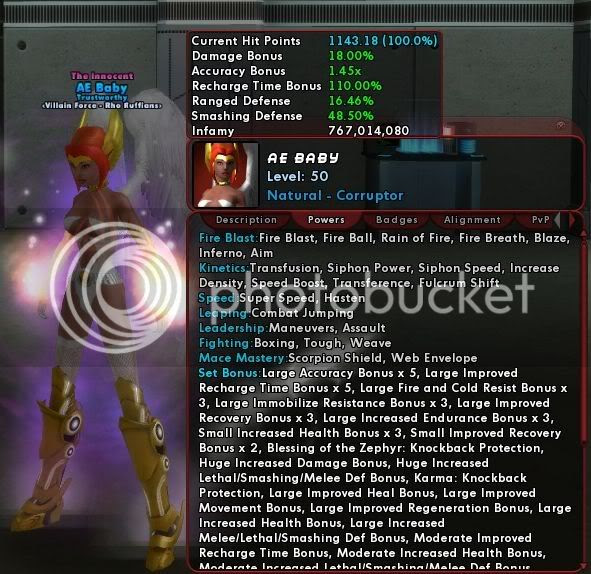 Plus I was finally able to claim the Ascension armor that the game has been bugging me about for three weeks.  :p