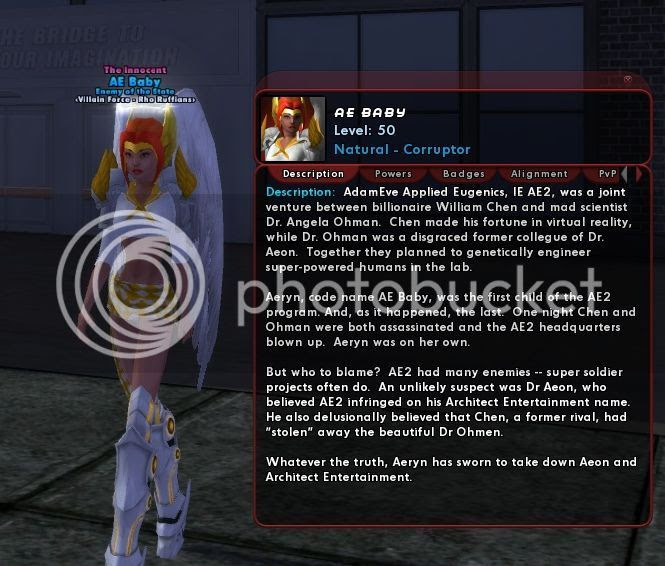 About a year and a half ago I decided on a project:  to level a character to 50 in a single month, and to have a fully IO'd build a the end of that month.  It was an exercise in how to leverage the market to get the build you wanted, because there were so many people who wished they could afford a nice build, but didn't know how to do it or where to start (or just needed a push to decide to do it).

I had the name AE Baby saved on Virtue, so this became my project toon.  I'd never played a corruptor to 50, so I decided on a fire/kin corruptor.  And off I went, posting my progress every day in a thread on the forums.

That thread proved quite popular.  People love having something to read in the morning and it's fun to see how a project is progressing each day.  There were some people who complained that I was cheating (prior knowledge, veteran advantages) or that I didn't prove anything and nobody would care -- but in fact, quite a few people said that it inspired them to learn to market and earn money for their own uses, so it proved to be a success.

Quite beyond that, my fire/kin corruptor also proved to be a huge success for me personally.  I loved the name, it always got responses from people and people remembered who I was, I loved the concept, to the very end of the game AE Baby never set foot inside an AE building, not even for the badge -- and the character was insanely powerful.  Fire/kind with an awesome build and well incarnated, I could do all kinds of things.  Because she was redside I didn't play her as much as I might have liked, but she was far and away my go-to character for anything redside.  I used her on Cathedral f Pain runs, I used her for redside Strike Forces, I always enjoyed playing her.  And I was finally convinced that corruptors were some of the greatest  characters in the game.  Any team with a few corruptors on it was as good as gold.  I always liked defenders, but corruptors were better.  They became probably my third favorite AT after brutes and scrappers.

I'm hoping to respost my entire "Zero to Awesome" AE Baby thread here in this blog at some point in the near future.