Draeth Darkstar
This is a cool idea, but I have one little nitpick...


Originally Posted by Organica
So much easier to do with /auctionhouse.


Originally Posted by Organica
With about 2.5 million in capital raised, I placed a lowball bid on a stack of 10 of one of my current favorite recipes to craft and sell... I can buy the recipe for as little as 5,000, and the crafted recipe sells for around 10 million. That's a good place for me to start. ^_^.

...sort of invalidate the idea that "anyone can manage this, starting from nothing"? The fact that you have /auctionhouse to use means you have years upon years of experience with the game (and it's economy), which, while kind of difficult to quantify in a thought experiment, is invaluable to your ability to actually pursue a project of this type.


Originally posted by Draeth Darkstar
This is a cool idea, but I have one little nitpick...
Don't things like this...
...and this...
...sort of invalidate the idea that [i]"anyone can manage this, starting from nothing"[/i]? The fact that you have /auctionhouse to use means you have years upon years of experience with the game (and it's economy), which, while kind of difficult to quantify in a thought experiment, is invaluable to your ability to actually pursue a project of this type.


Without /auctionhouse, you have to run to the market first.  That's really not that hard, I've done it in the past when I didn't have /auctionhouse.  In Port Oakes where I was doing this, the market and the guy you sell to are a few hundred feet from each other.  In Atlas Park or King's Row they're not that far apart either.

I still have to run to a university or base portal to craft stuff.  I've managed it somehow.  ^_^

As I've already said -- I can do it faster.  But that doesn't mean other people can't do it at all.

As for the other question, I've already pointed to several things you can do to get started:  craft level 30 or 35 generic IOs, or buy Efficacy Adaptor end/rech and end/accuracy recipes and craft them, and/or Performance Shifter end/rech recipes once you have the capital for that.

What you can make money on changes, and that's where a lot of market knowledge comes into play, but it's easy to craft damage/endurance/heal/accuracy generics, and probably the endurance IOs I mention are always going to be profitable because people always need endurance IOs.


Originally Posted by Organica
(I had read somewhere that 4 points would protect you from a lot of things, and 12 points would protect you from virtually everything else, but that there was nothing in between 4 and 12 points that having 8 points of knockback protection would help you with -- however when I only had 4 points KB protection, earthquakes from CoT mages would still knock me down, but it seemed when I had 8 points protection I wasn't being knocked down anymore. Was that just my imagination, or is 8 points of protection actually useful?)

To answer this for ya:

Most knockdown/knockback comes in four flavors:

Since people on the forums tend to be insane, the meme has become, "12 or go home". Because they all solo AV's before their morning coffee.

For the huge majority of play, 4 points is fine. Even on my fire tanks, I only use 4* because I have other uses for those other two slots. 8 will cover almost anything short of AV's or unlucky stacks of effects.


*Granted, 4 points on a busy tanker makes herding the patrons in the STF a bit of a fun ride, but hey, I kinda enjoy pinging and ponging around every now and then. Wakes people up to the abuse Tanks endure. I had a guy send me a tell once, "How are you surviving that beating?!"

I also respec'd my character to sort out the order in which I picked my patron powers.  I have three slots in Scorpion Shield and six slots in Web Envelope, and it was important that I pick those up at 41 and 44, and not pick Aim before them.  I really don't use Aim much anyway -- I'm thinking that it won't matter much if I grab lower-level Rectified Reticles because it's basically a 2-piece mule set for the defense the set provides, practically speaking I never have time to hit Aim.  But those IOs cap at 20 and it bugs me to slot level 16 or 13 or whatever IOs for any reason, unless it's something like a proc.

But the respec allowed me to pick up and slot out Web Envelope, another power that I may not use much but grants me extra defense.

My LotG defense IO sold, and all of the stamina IOs I had.  I crafted some of the Eradication Damage recipes to sell -- it looks like those would sell much better than the triples that I've been unable to sell. 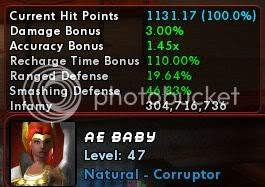 Shadow Wail
do you feel that double xp weekend was a bit of a cheat since it hasnt taken you 20 days to get to 47 but instead 14.

How would your results change if you dodnt play during double xp?


Originally Posted by Shadow Wail
do you feel that double xp weekend was a bit of a cheat since it hasnt taken you 20 days to get to 47 but instead 14.
How would your results change if  you dodnt play during double xp?


I think I could get a character from 1 to 50 in 4 to 6 weeks of normal play.  It's just as easy to say I'm cheating because I play more hours a week than the average player.  But on the marketing side, it doesn't significantly help me make money faster... under more normal conditions I'd be able to have more money on my character by the time I reach 50.

But I did know DXP was ahead when I decided to do this.  ^_^  Although I didn't really expect to be at 47 so quickly.  But then, I met a lot of people over the weekend who were leveling as fast or even faster than I was -- many who were in the low 40's and had started at level 1 on Thursday.  I spent time collecting explore badges and marketing instead of leveling, I suppose.

Ultimately it allows me to try and incarnate the character a bit more, I think.