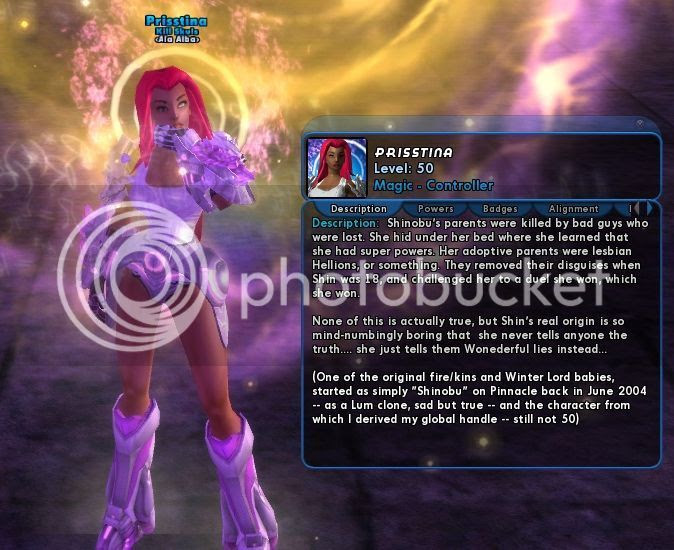 Somewhere I have an entire post that I wrote and never actually posted about getting Prisstina to level 50.  I think it's on my computer at work, I can't find it here at home or I'd pull it out and use it.  But basically, Prisstina is one of my original characters, and the last of them to reach 50.  The journey was a convoluted one and took 8 years.

My orignal group of characters on Pinnacle were:  Jalia (later Black Unicorn on Freedom), a fire/axe tank who I got t 50 in the first year; Organica (moved to Virtue), a katana/regen scraper who I got to 50 eventually; Jalia Genie (later Empathy Girl Five on Virtue), an emapth/psi defender who never made it past 25; Mouse Police (the original, later moved to Justice), a dark melee/invulnerable scrapper who made it all the way to 45; Jalia Ice (later Mouse Police on Freedom and finally Blaster Girl One on Virtue) an ice/ice blaster who made it all the way to 42.  And finall, Shinobu, my fire/kin controller.

I liked to joke that she was the original fire/kin.  She was created probably around May or June 2004, years before fire/kins were recognized as one of the most deadly ATs (or best farmers anyway) in the game.  I chose those two power sets for very specific reasons -- fire conrol, because one of my early friends in the game had a fire/rad and demonstrated several times for me how insanely powerful he could be, and kinetics because I'd watched someone propel a skull all over Atlas Park, and that just looked like too much fun not to try.  My fire/rad friend allowed that fire/kin was probably a really good combination too, though.  ^_^

I also was copying another friend when I made her.  One of my real life friends who played the game for a while had created a Lum clone (and named her Lum), and I was really taken with the look, so Shinobu began her life as a second Lum clone.  I named her Shinobu because the name Lum was taken, and because I would have never done a direct copy of a character in any case, i was afraid of getting generic'd (something that never ever happened to me, I'm glad to say), and because in the manga/anime Uresei Yatsura, Shinobu is Ataru's girlfriend before Lum shows up and claims him as her fiancee.

I teamed with ny friend's Lum character a few times.  I have pictures of us in King's Row and Perez Park.  I got her up to about level 13, but levelling a controller back then was painful if you weren't on a team and weren't 32 yet.  Virtually my only attack that did damage was Char, and charring an enemy to death is a very slow process.

Then, along came Winter Lords.  Yep -- Shinobu wasn't just one of the earliest of fire/kins, she was a Winter Lord baby!  I went from 13 to 27 in just a couple of days using Winter Lords, and then I stopped because I was wary of abusing the experience exploit too much.  But I did eventually get her to 32 and got my imps, and they were amazing to behold.  Back then you could potentially have up to 15 out at once (you could summon 3 times with good recharge before the first group poofed, and a single summon produced 3-5 imps)..

Shinobu was the character I was playing when I basically got excommunicated from my first SG because I'd dropped out of the SG.  These were the people I knew from Toontown, and all you really need to know about them was that the same night I removed my character from their SG (because I really didn't play with them much or feel a part of their circle of friends), I was put on ignore and barred from their message board and never even got a chance to explain why I'd left.  Basically, they were not the kind of people I enjoyed playing the game with, when it came right down to it.

Shinobu was also the last character I played before I originally quit the game.  I took her to test/beta to check out the new Croatoa zone, and test how the new fire control changes worked.  This was when they limited you to three imps, but they made them more powerful so the change wasn't such a bad thing.

When I came back to the game, I eventually moved Shinobu to Virtue and gave her the name Shinobu Dragonfire, because Shinobu was taken.  That always bugged me, both that I couldn't play on my chosen server using my global name, and that I picked such a stupid name for Shinobu when I moved her.  Eventually I found the name Prisstina fee, and changed her name again.  And, slowly but surely, I got her up to 50.  The final ding came this Spring of 2012, almost eight years after I'd created the character.

And, just like Shinobu Valentine, she was one of the best combos that controllers had to offer, and I still really didn't enjoy playing her.  I didn't dislke it, she had a great build and was capable of all kinds of things, but it just wasn't my natural play style.

I would very much lave liked to get Mouse Police on Justice and Blaster Girl One to 50 too -- and Empathy Girl Five as well, I guess.  All of my old characters that survived from my first year of playing the game.  But Prisstina was the last to do it.  Kind of sad in a way, that I picked the game's king of farmers and even powerlevelled on Winter Lords and it still took me 8 years to hit 50, hehe.
Posted by Miko at 9:28 AM