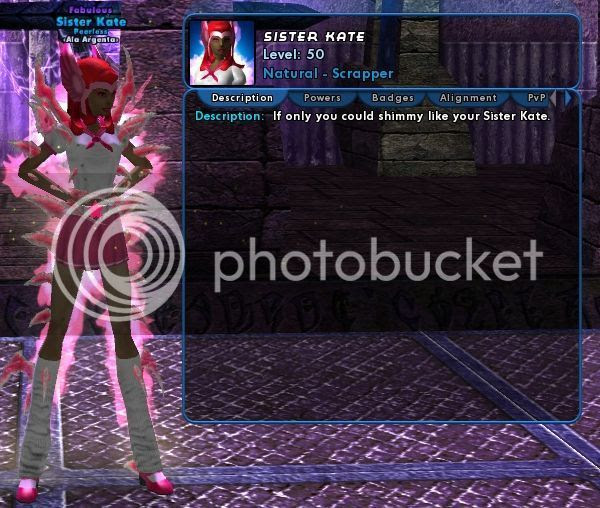 I made Sister Kate around the same time as my new crop of brutes, but Kate is a scrapper.  I made Kate to test out spines, which was the set that Multiple Girl II used for her main character.  MG II was spines / invulnerable, while Sister Kate was spines / willpower, but I worked hard to make sure she was softcapped to smashing/lethal and energy/negative energy, something I eventually did for every willpower scrapper or brute I owned.  And I owned a lot, it became one of my favorite armor sets.

Sister Kate was very tough and fun to play.  On a lot of these characters, the brutes and the scrappers, I would at least play them once a week to run a Signature Story Arc 1.1 for the hero merit, so I got to play most of them on a regular basis, but only scaled down to level 20 or wahtever it was.  But I also got to use Kate a few times teamed with MG II which was a lot of fun.  Anyway, that's the entire story on that character, I would have been happy making her or War Maid or Shinobu Eden or Trinkets my main, all of them were fun to play, but I had sooo many other sets that I wanted to try as well that I was always creating a new character and leaving most of the older ones unplayed.

Sister Kate was named because I loved the version of that song as performed by The Ditty Bops
Posted by Miko at 5:00 PM