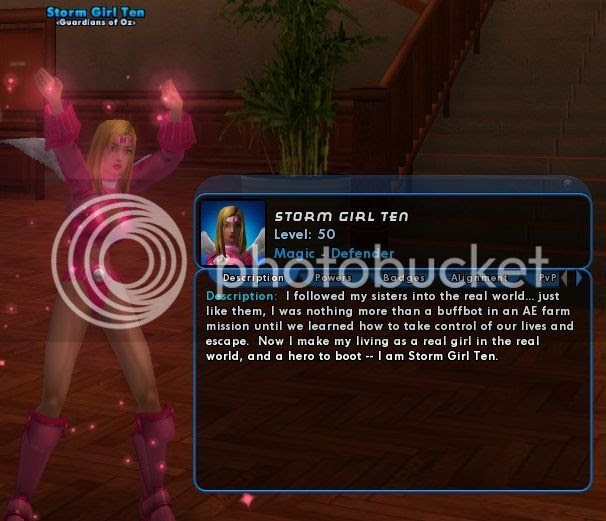 This character was almost an afterthought.  There was a "random newbie naked run and costume contest" event held in Steel Canyon, and I created a storm/water blast defender for it, with no thought other than "haven't played those much".  Named Shin Random, she was ugly but I think I did really well in the race.

Afterwards I decided to rename her Storm Girl Ten and make her one of my buffbot girls.  I had always avoided storm as a power set, the stories about bad stormies were legendary on the message boards, and there wasn't a lot of buffing involved in the set so I hadn't made a Storm Girl buffbot before.  But Storm + Water Blast was a natural fit, and it turned out toe be a whole lot of fun to play.  I wound up playing Storm Girl Ten quite a bit in the last month of the game, and worked hard to get her to 50.  She was the last of my buffbot girls to make it to 50 -- none of the others made it past the 20's except Scrapper Girl One I think.

So what began as a joke one-off character for a one-time event turned out to be one of my last ever new characters and one of my last level 50's, and a really fun character to play -- probably my second favorite defender behind Forest Goddess, or maybe even my most favorite.  Water blast was what made it work -- what an awesome blast set that was.