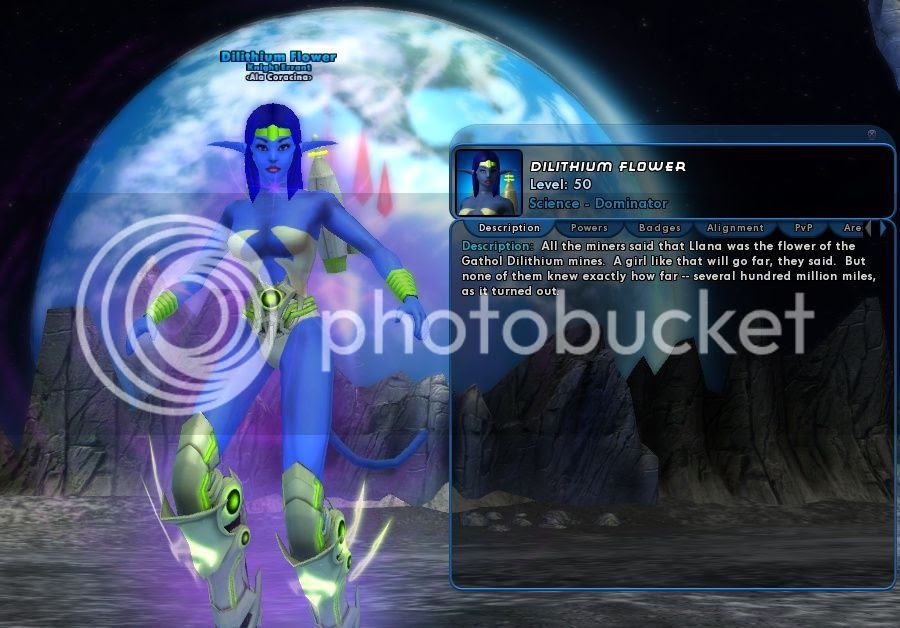 And now we come to the final 10 of my level fifties, and the last one that hit 50 before the big announcement.

In July I did a second "Zero to Awesome" challenge.  This time, to deflect the "Ur Cheatin!" comments, I started out on a brand new account that had been a freebie account for several months and only had one character on it.  I used a box code to make it VIP, and I was off and running.

My choice this time was another dominator.  Although I didn't enjoy playing Ash Valentine that much, I wanted to give doms another shot.  I specifically went with fire/plant control because it was considered to be a very powerful combo, and it was.  Seeds of Confusion alone would have seen to that, but it had other tricks up its sleeves too.

Dilithium Flower was a name chosen because I had for a long time wanted to make a character named Lithium Flower (title of the opening track for Ghost In the Shell:  Stand Alone Complex) but the name was already claimed on Virtue.  I'd tried more than once to come up with an alternative that satisfied me, but names like "Lithium Rose" etc were also taken -- I guess there were more than a few GitS fans out there.  ^_^  Dilithium, of course, are the imaginary crystals that power the ships in Star Trek, and this also suggested a space theme similar to Jennie Nova.  The final piece of the puzzle was the Loretta Lynn song "Van Lear Rose" about a beautiful girl from a coal mining town (Lynn's mother, I think actually).  All of this combined to  give me the name and bio for Dilithium Flower.

My project was a success -- Dilithium Flower was 50 by the end of July, and had a very powerful build to boot.  I only played her a few times after that, partly because playing on what became my third account meant not having all of the fun veteran powers that I'd come to rely on, and also meant I was cut off from some of the channels I normally used to talk to friends with -- that account was part of MG's Taskforces and Brickhouse Chat, but not the others.  But I showed how easy it was to earn money and build a really nice build in only thirty days.  The only thing I had over new characters was knowledge, but that's the entire reason to show how I did it.  Several people thanked me for the thread, lots of people read it, and several used it to do the same thing or to earn money for their characters for the first time.  The only sad thing about it all was that when I finished, were were only one month from the big announcement, so those that benefited from my thread had only a short time to enjoy it.  But I'm very glad I did the project when I did, if I'd waited longer I wouldn't have had the chance.  Sieze the moment while you still can, in other words!
Posted by Miko at 10:03 AM