Zero to Awesome Day 6 and comments from Day 5


Eric Nelson
Neat project, Organica, I'm following it with quite a bit of interest.


Originally Posted by Organica
I wanted to make sure that my bank mission went well so I'd get the contact afterwards...

Thought I'd mention for anyone who isn't aware, that you don't have to succeed on a Safeguard or Mayhem mission in order to have a contact offered to you afterward -- you just have to complete it (success OR fail, either one works).

Is that true?  For some reason i seem to recall not being offered a contact when I failed, but you're probably right.

One thing I forgot to mention:  salvage for level 25 and lower IOs is cheaper than mid-level salvage.  With the money I've already earned it was quite easy to completely IO my character with level 20 IOs.  Those can probably serve me until I start buying level 30-33 set IOs.

Edit:  I did manage to get to 20 and picked up speed boost.  :D  Not five minutes later I joined a team lead by my friend Dante to take down the Ghost of the Scrapyard.  Eventually I managed to get five rogue tip missions in, but dredging for tips in Sharkhead Isle is one of the most tedious experiences I've ever had in the game, and I've done it on plenty of occasions.  Your best bet is to take down bosses, but taking down a level 20 or higher boss when you're level 20 yourself and not a  great soloer is tricky.  I resorted to running back and forth from the hospital a lot so I could stock up and eat enhancements like candy.  And when I was done I was nearly 21.

Also bought quite a few of the recipes I was bidding on (the level 50 ones to sell).  I crafted some LotG and placed them up for sale.  I have bids in on five Gift of the Ancient: Defense recipes too, those are over 3 million a piece to buy but will sell better than the other stuff I'm working at the moment. 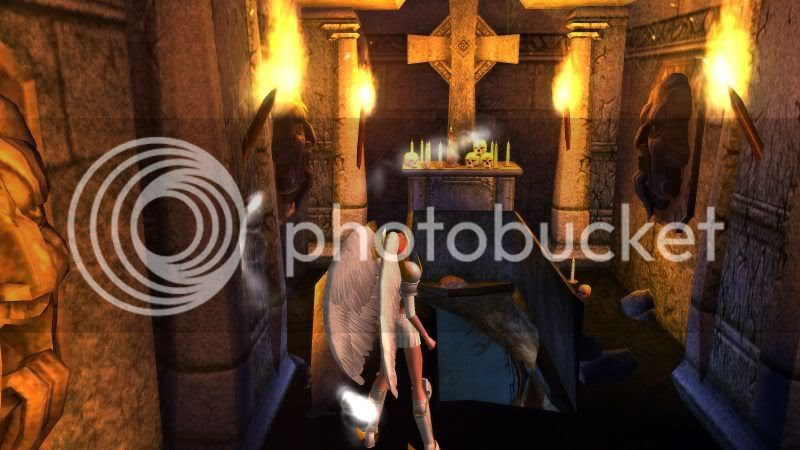 This is the entrance to the tip mission "Curse of the Curious Mook".  However I don't think I've seen it before, and I'm pretty sure that's because it's the [I]villain[/I] version of the tip rather than the rogue version.  Because I wasn't sure I dropped the mission, I didn't want to do a villain mission by accident.  (It's been a long time since I did tip missions to change alignment instead of just to earn a-merits -- so I've gotten in a bad habit of clicking without even looking.)

Anyway, it's a very cool mission entrance, like desciending into a grave or something.  ^_^

Djeannie
you should stay villain side, going hero is totally wimping out.

Cinder_Flux
Yeah stay with the dark side.

You know thats what Dr. Evil would do.
:)

I've actually run into several people today from the forums, who recognized my character, heh.  Just dropped an Ouro portal for a character of Diesel Punk.  (Which I have because of the Midnighter mission above, involved time travel I guess -- I can't actually [I]use[/I] the portal yet, but it was useful for someone else!) 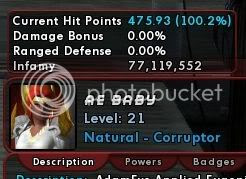 Anyway, level 21.  :D  Bribed Mortimer Kai into working with me... though from what I remember, people don't actually like that SF much.  Anyway, I have a BBQ to go to tomorrow, probably won't get to play.

I think I may go rogue for the next week and try to hit 35 by Friday or Saturday if I can.  After that I can go back redside with no worries, since I can always join an ITF.  :D  I might actually do several ITFs for DXP weekend if it works out that way.


Originally Posted by Organica
Is that true? For some reason i seem to recall not being offered a contact when I failed, but you're probably right.

Brokers do NOT scale with your level. If you've already been introduced to, or outleveled, all the contacts that the broker offers, then you won't be offered a new contact, win or lose. You also won't get a contact if you say "No" to the Mayhem mission. However, if you are in level range, they'll offer a contact, even if you fail, as long as you try.


Quote:
not sure if I want to turn full hero yet, I do want to be able to buy a merits eventually,

Just a reminder that if you accidentally pick up any hero/villain merits and you change alignment you lose them and get nothing in return.


Originally Posted by Fulmens
Just a reminder that if you accidentally pick up any hero/villain merits and you change alignment you lose them and get nothing in return.

Good point to remember. IF s/he's not done any of the stuff to earn a merit also remember the first time you don't get an a-merit, you get regular merits.

If for some reason you have a merit then probably a good idea to spend it on something like a kin combat that you can craft and sell for a fair bit using only 1 merit.

That's true.  (And I'm aware of that -- I have over 1300 merits on Tiffany Blackheart and over 700 on Mouse Police mostly because they're vigilantes and I can't convert them, heh).  So I have to plan around that fact, because I want to earn as many merits as possible and convert them to a-merits, and I'd like to be earning a-merits via tip missions too... but I won't have time to do that if I stay rogue for very long.

(But going rogue will allow me to collect well over 100 merits just from explore badges.)

Another problem that I have to overcome is this:  I want to use most of my market slots to earn money, but at some point I want to start bidding on the IOs I'll need for my build.  In the past I've dumped money on a character and placed lowball bids on the IOs I'll need, confident that I don't need to be earning any money and can wait for the bids to fill.  Doing both -- earning money, and buying a bunch of IOs to slot (but not paying buy it nao prices) is going to be interesting.

For the moment I'm trying to earn as much money as I can.  All of my profits I've plowed back into buying recipes to sell -- ideally I'll have a lot to sell come next weekend (DXP weekend) and really clean house.  But I'm not using base storage to do this, that would kind of violate the rules I think.  ^_^  Though I probably should buy up the salvage I'll need and fill up my vault storage at least.

In the meantime, it didn't seem useful to keep two slots filled trying to lowball a karma kb recipe at 500,000 when I could buy one nao at 2 million, so I did that and crafted and slotted it.  I still have three bids out on Unbounded Leap stealth recipes though, those are harder to come by than I remember them being.  My other slots are being used to buy up recipes that I know will sell very well, which I'll say more about later. 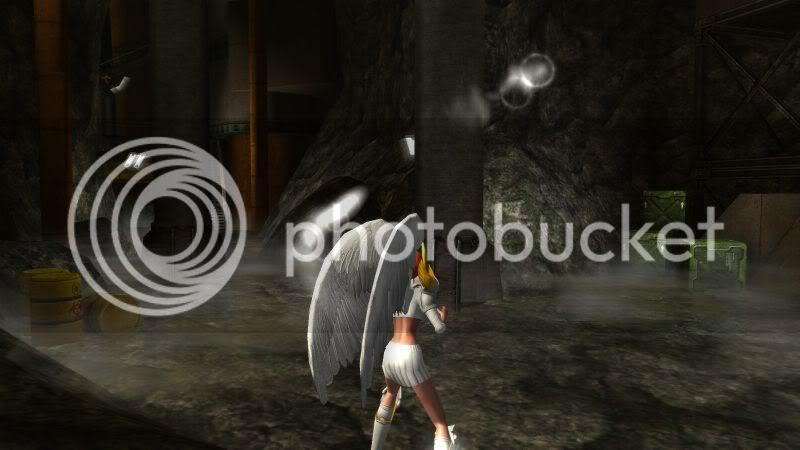 My guess would be that they are cutting corners on maintenance.

Fulmens
For vault storage, I'd do something like "2 of each seriously variable midrange uncommon, 3 of each seriously variable midrange common." There are uncommons that will never cost much (worst case, you try again in the morning)- I'm thinking of Data Drives here. There are commons that will never cost much, though not many; Improvised Cybernetics is kind of the poster child here. But Inert Gas can vary between like 11K and 200K.

If you wanted to be fancy you could put in a bid of like 8 of something you knew you were going to use a lot of, very soon... but I don't do that kind of planning and I never have.

I would also say that, though you can't use BASE storage, you can use EMAIL storage. If you are doing something else with your global emails, you could reserve 10 or 20 base storage as an equivalent. The assumption is that a starting player isn't doing anything complex with gleemail.
---
Well things got interesting.  Before I left for my BBQ today, I grabbed all the explore badges in Sharkhead, and then went to Praetoria and grabbed all the explore badges in the three above-ground zones.  So that's 20 merits.  In all that time I sold a couple of things but had not bought a single new recipes to craft or sell.  So I got a little worried and put in bids on Efficacy Adaptor end/rech and end/acc, and bids on 3 stacks of 10 each LotG def/rech.  Then I went to my BBQ.

And I'm also sort of in charge of one of the Hero Force divisions now, so I need to pay attention to that too.  ^_^  Though HF isn't the massively active SG it used to be.  But maybe we can fix that.  :D

(also AE Baby is a member of Villian Force - Rho Ruffians -- which is kind of cut off from the rest of HF because there's no VG-SG coalition chat of course.  I was kind of surprised to realize there are still active players in the Rho Ruffians, I rarely check in on them.  They're kind of an independent sattelite of HF.  ^_^ )

Nihilii
Something I used to like to do when I wanted to buy IOs and make a profit at the same time is to bid on stacks of 10 regardless of the actual number of this specific IO I needed. As a result I often got multiples and could craft and resell the extras for a profit.


Originally Posted by Nihilii
Something I used to like to do when I wanted to buy IOs and make a profit at the same time is to bid on stacks of 10 regardless of the actual number of this specific IO I needed. As a result I often got multiples and could craft and resell the extras for a profit.

I do something like this with salvage.... When I'm buying something like Psionic Threat Reports and the going price goes up over 500K. Instead of putting in a low bid and waiting, I pay whatever it costs, and then leave a bid for 10 or 20 at a lower price to resell and get my money back.