Saturday morning DXP weekend:  I woke up and decided to check the market.  Sold three Performance Shifter IOs overnight, woo.  Then I saw someone forming a Tarikoss.  Hey, I did Posi 1 & 2, why not hit the WST trifecta?  So I joined up. 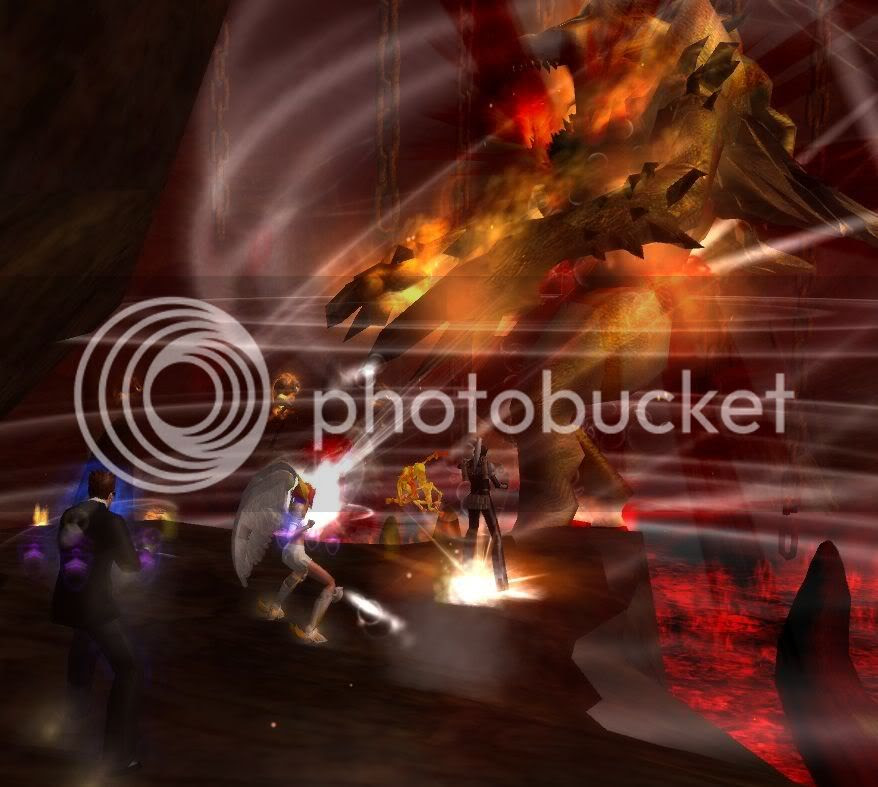 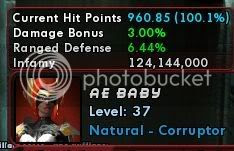 That got me to 37 and I also sold another Performance Shifter.

After that I finished my new level 30 costume (and went back and redid it twice, and I still don't like it much) and then I ran my Midnighter's arc.  When that was done I wandered in to Cimemora and said hi to Imperious and also ran the "say hi to a lot of Cimemorans" mission.  So that's 13 merits for Tarikoss, 9 merits for Midnighter's arc, and 1 merit each for Impy & the Cims.  (Sounds like a band name.)

I checked the market while in Cim and found a level 39 Unbounded Leap stealth IO for sale.  I had a bid up on a different level for 13 million, I bid 13 mil on this one and bought it.  Score!  Stealth comes to me at last!  I was really feeling kind of useless on all of those TFs without it.

Before I could craft my new stealth IO, I decided to join an ITF that was forming.  The guy that was doing it was shouting all in caps for people to join, which should have  been a big clue, but instead it turned into a joke about us being "Task Force Shiftlock" (someone said they'd been hoping for "task force ee cummings").  So the guy proceeds to invite seven people, and when everyone's in zone, announces that his friend wants to join and wants to know who he should kick?  "AE BABY, YOU LOOK PRETTY USELESS," he says.  I have no idea what he's basing this assessment on, maybe the name or maybe my low level, or maybe he's just an idiot.  "BUT YOU WERE THE FIRST TO JOIN," he adds.  He tells someone else he's about to kick them instead -- complete with another insult -- when a third person just quits.  So then he invites his friend.

"Someone set a mission for me," his friend says.

"GET YOUR A$$ IN ZONE AND I WILL," the leader replies.

"Your friend wants to use the mission teleporter," I say... pointing out what seems obvious to me.

"SOMEONE GRAB A THROWAWAY MISSION," the leader says.  Almost at the same time, he asks his friend if they have Midnighter's club access.

"THEN YOU'RE DEAD TO ME!" he exclaims, and promptly kicks them.

He starts to advertise for another team member, but another person quits.  And another.

"EVERYONE'S QUITTING," he exclaims.  "F THIS!"  And he promptly quits, just as I was telling a friend that I really didn't know about this team I was on.

So... probably a good thing in retrospect.  I join a different ITF.  This one also has a lot of sub-50 characters.  Hey, it's DXP weekend!  So the leader decides to put the only level 50 on the team in charge.  She's never run an ITF before, but that's okay.  We go slow.

Boy, do we go slow.  One of the two tanks -- the one with taunt of course -- is very squishy -- though he does have a self-rez power.  Maybe to counterbalance this, we have a stalker who is one of the least squishy people on the team... but mostly we have a sub-50 squishy team, that wants experience anyway.  So we work our way slowly through the first two missions.  After this, someone says they have to go and quits.  In the third mission, our scrapper dies (very squishy scrapper -- tho it's easy to be squishy on an ITF), asks for a wakie, and as far as anyone can tell quits because nobody gives her one.  In any case, she vanishes and does not come back.

This is a bit of a blow because we don't have a lot of damage.  On the other hand, I've hit 38 and picked up Fulcrum Shift -- unslotted, but still a game changer.  ^_^

The third mission resets itself again after we're finished with it.  We stand around and discuss it, send a petition, I advise everyone to log off and back on... in the end we get it to set the fourth mission but it wastes about 20 minutes or so.

We work our way down the left hand path.  We clear, we explain strategy so everyone understands, we've made sure everyone stocked up on purples previously, and we pull Rommy to the grass.  We have Impy on our side, we have fulcrum shift, we have a very busy fire/kin in fact... heal, fulcrum shift, siphon power, attack, oh people want speed boost again!  But I certainly felt useful!

After, I crafted and slotted my stealth IO, placed bids on an Oblit quad and a Performance Shifter +endurance and logged off.

Over the course of the day sold at least 10 more Performance Shifter IOs.  Those at least are making money for me, but I only have a couple left to sell.

Bought a Performance Shifter chance for +endurance level 42 recipe for 26 million, and a Obliteration level 38 quad recipe for 51 million.  Also my last Positron's Blast recipe bid came in, so now I'm bidding on the Rectified Reticle recipes (also expensive) and still trying to get a Kinetic Combat triple and a Touch of the Nictus acc/end/rech.

Basically I'm spending money as fast as I make it, and buying odd-level IOs that are available for the going rate.  But these are IOs that have few copies for sale on the market beside the max level, so I want to snap them up if and when I can.  My Oblit set is now complete, and I have all my Decimation and Positron's Blast IOs so that's 6.25% rechage x 5 and 5% recharge from the Oblit.  ^_^

I took a break and when I came back I crafted a few generic IOs needed for my build -- accuracy and recharge.  I did these at level 35.  Then a friend asked me to join a hero tips team.  Not that I want to become a hero, but it was good experience.

Something about DXP weekend:   nearly everyone you team with is playing a new character that they're leveling.   You don't get many awesome builds or characters with incarnate powers.  But you still get people that think they can turn a longbow mission up to +4, with enemies as much as +5 to most of the team, and if the team fails it's because the other players suck and they just need to find a better team.

Anyway, after that idiot quit we went on to run several missions over more than an hour.   Then four of us (including my friend and I) joined a Manticore TF.  This went fairly slowly too since we mostly didn't stealth -- but I got to employ my new stealth ability on the glowy mission at least.  :D  We finished in under an hour and a half, I got more merits (up to 362) and I was level 42 and close to 43 by the end.

And the best part?  I got my first very useful drop -- a level 35 Blessing of the Zephyr 4 points KB protection.  What incredible luck!  I slotted it in super speed.  I also have the Steadfast Protection in Tough, and now I will definitely have to rework my build so that I keep the Karma KB protection that I currently have in Manuevers.  I absolutely hate getting knocked down, and 12 points protection is the cure.

(I had read somewhere that 4 points would protect you from a lot of things, and 12 points would protect you from virtually everything else, but that there was nothing in between 4 and 12 points that having 8 points of knockback protection would help you with -- however when I only had 4 points KB protection, earthquakes from CoT mages would still knock me down, but it seemed when I had 8 points protection I wasn't being knocked down anymore.  Was that just my imagination, or is 8 points of protection actually useful?)

Anyway, I spent more of my money -- I found a Touch of the Nictus level 37 and bought if for -- I forget, about 5 or 6 million.  That completes that set.  And I placed a bid on the other Rectified Reticule that I wanted, and also three Luck of Gambler defense recipes (I bought one at level 32 for 9 million).

Lastly I bought all four Efficacy Adaptor recipes that I need for Transference.  For these I bought whatever was available, so level 30 for one, level 32 and 33 and 43 for the others.  They were mostly quite cheap, though I had to go up to 2 million for one of them.

My build is really coming along.  :D