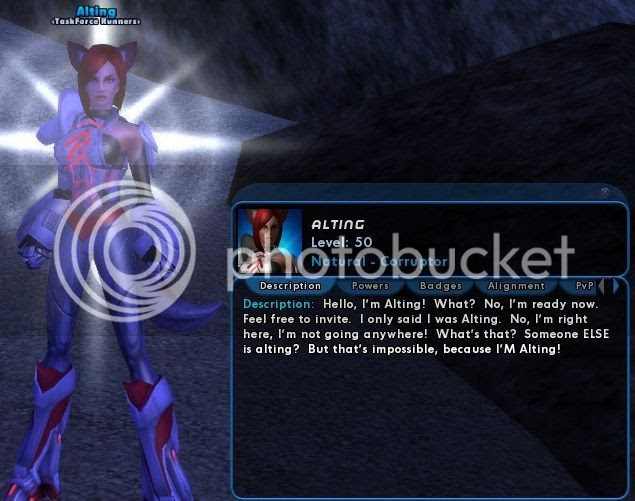 Alting was one of my first corruptors, though not the first one to 50 (that was AE Baby).  Alting was a dark/dark corr, which I kind of got tired of after a while.  I had far too many fenders and corrs with darkness powers, really.  I don't know why since it wound up not really being one of my f avored sets.  In any case, Alting was essentially a joke character, created so I could say, "You're not alting.  I'm alting!"  But the joke never really got old for me.  I gave her a bunch of wildly different costumes and looks, because the idea was she was "alting" when she changed costumes... but the one above ultimately became my favorite look for her.

What I remember most about this character is that I used her and Nina for my "30 merits in 30 days" experiment, in which I random rolled a hero merit every single day, which required me to earn 50 regular merits per day on each character.  This was fairly easy at the time with Alting because MG was in a mood that month to earn merits too, so we ran a "Hessicore" TF every day -- Manticore, which could be finished in 30-45 minutes, and Hess, which could be shaved to as little as 20 minutes I think.  We got really good at speeding both of these TFs.  Alting was level locked at 30 for the entire month, so MG was always surprised when she still wasn't 50 two or three months later.  But eventually I got her there.
Posted by Miko at 8:30 PM