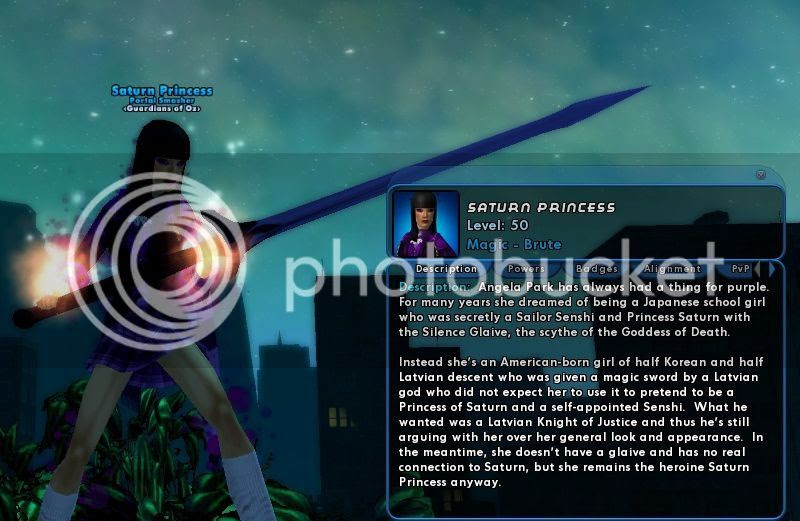 Saturn Princess was very tall and very thin.  She was otherwise not really too unlike many other characters of mine, with a schoolgirl look and an apparent resemblance to one of the Sailor Senshi from Sailor Moon -- this time it was Sailor Saturn, of course.  I always liked the look of Sailor Saturn, and I had a wallpaper on my work computer that would come up occasionally (it changes every half hour) that was Sailor Saturn, and I really had a desire to make a Sailor Saturn-like character.  So that's what you get:  Sailor Princess.

I made her a Super Reflexes brute.  I'd only played Super Reflexes up once before, on Mouse Police on Victory, and never on a brute.  It's a nice set -- easy to softcap, very resistant to defense debuffing.  Not my faavorite set but I'd pick it over the ones that made it impossible to see my character.

I got Sailor Saturn up to 50 pretty quickly and enjoyed playing her.  I bought an excalibur sword for her as well, probably one of the last ever sold on the market.  I didn't get enough time to play her though, and in the end when I really wanted a titan weapon brute, I usually turned to Megami Hime instead.
Posted by Miko at 11:29 AM