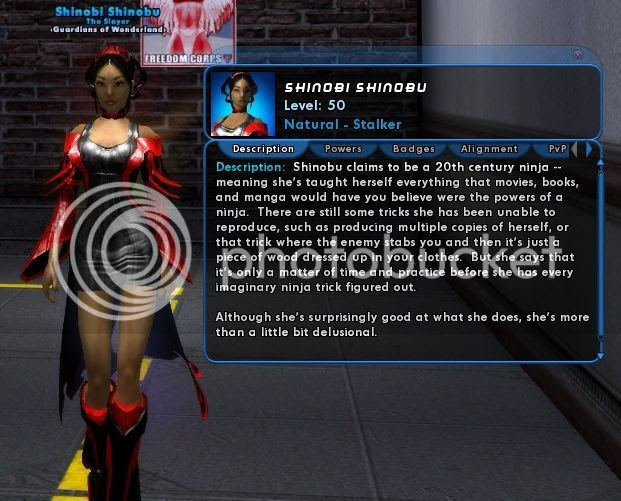 After finishing my Miss Shinobu widow project, I set my sights on getting a stalker to 50.  This happened after the last round of stalker changes, which almost everyone agreed made them much more fun to play, more survivable and more useful on a team (and the few that really complained about the changes were basically saying "they made them more like scrappers and less like what stalkers were originally meant to be" which was mostly true, but irrelevant in my opinion).

I had a level 35 stalker already, and I really disliked playing her.  She was yet another martial artist / willpower character, but sadly martial arts on a stalker removed the only source of AoE, and willpower on a stalker removed one of the best powers in the set, Rise to the Challenge.  (This to add in assassin's srike and hide, respectively.)  The result was a character that felt very one-dimensional and weak.  I don't know how much better she would have played after the stalker changes, I really had hoped to eventually go back to her and finish the trip to 50 and find out.  But in the meantime, when I decided I wanted a level 50 stalker, I made the choice to start anew with sets that I already knew would work really well on a stalker, and that I hadn't played to 50 before:  Street Fighting and Ninjitsu.

Shinobi Shinobu was the result (shinobi meaning female ninja)..  As with my previous project I got to 50 quickly and IO'd her out, money no object build, and she was amazing to play.  I wasn't necessarily compelled to make a lot more stalkers, but I was certainly convinced that a stalker could be a very fun character and quite powerful in their own realm, which was generally single-target killing of the biggest baddest enemies.

Once again though, I was so busy making more alts that I mostly played her running an SSA 1.1 once a week, and rarely got to do other things with her.
Posted by Miko at 8:16 AM