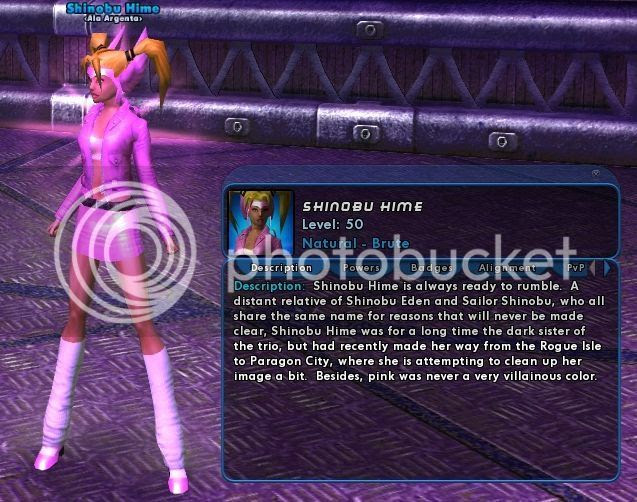 Around the time I was doing my AE Baby "Zero to Awesome" marketing project, CEBR mania was in full swing.

Top Doc had figured this one out, laid out the book on how to do it, and promoted it unceasingly.  It was built on the principal that a character at level 1 gained more experience faster than at higher levels, and that powers five levels above your current level were usable when you exempted down, and that a claws/electric armor brute had a damage aura and spin (aoe) by level six (and a claws/fire armor brute had the same thing).  And brutes gained fury from aggro and had a very high damage cap.

What all of this meant was that you could set up an ambush farm in AE that exempted you to level 1, and you were able to do insane aoe damage.  CEBR stood for "Claws Electric Brutes Rule".  The key to the whole thing was to stay alive.  This was accomplished by chewing on a large amount of defense and resist inspirations (purchasable just a few feet from the AE mission door) before running into your mission.  Eat a bunch of reds to jack up your damage too, and then you were set.  By the time those wore off, you'd able to eat more and continue to eat as new inspirations dropped, because you were killing at an incredible rate.  It was perfect self-PLing that anybody could do.

This was just before the launch of Freedom, and there was a special head-start offer of a new account for $1.99 or something like that.  So I bought a new account and started up a claws/fire brute.  I was especially curious to see how a pure AE based approach compared to what I was doing with AE Baby.  As it turned out, it was very comparable... I made good money on Shinobu Hime, and got her to 50 and got a good build in place.

And then my account expired and I didn't do very much with her. Eventually I began to play her more and brought her hero side, but she was still just a side project of mine.  I would buy a few points on the market so I could afford an invention license so that her IOs were usable.  She was a pretty good brute, but anyone not on my two main paid accounts was just for fun experimentation for me really.