Ten Who Got Close


I always had so many alts and so many project characters, and never enough time to pursue them all.  Some characters got pretty far -- level 35 or higher -- and then fell by the wayside. 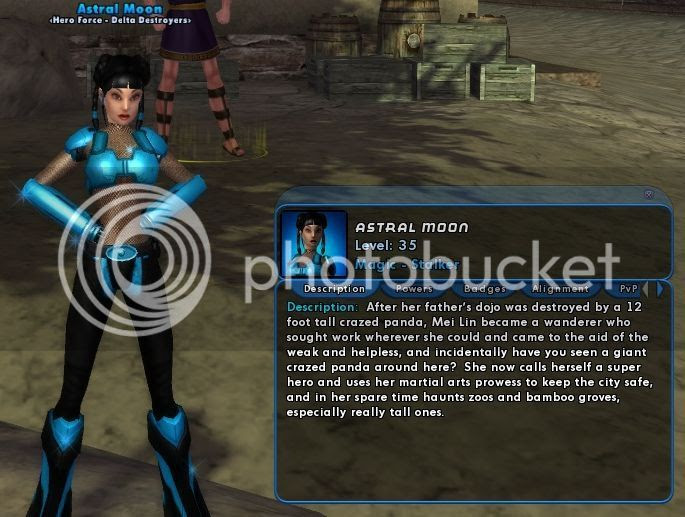 Astral Moon was my first attempt at a level 50 stalker, before the changes made them more desirable.  She was martial arts / willpower though, and still wasn't very desirable after the changes (to me anyway). 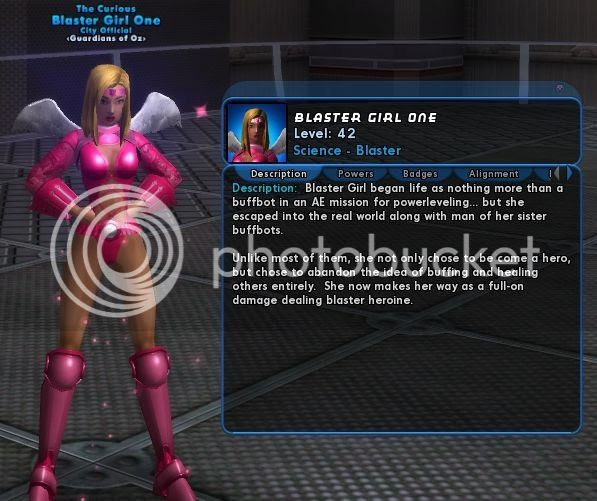 One of my original characters, an ice/ice blaster, I moved her to Virtue in the final months and recreated her as a former buffbot girl turned blaster.  I really would have liked to get her to 50, she was one of those characters who had existed for eight years. 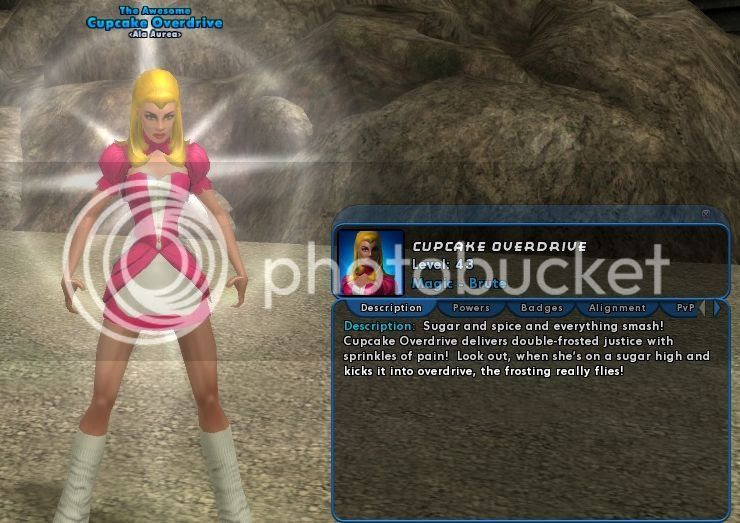 During the last double experience weekend in August I created Cupcake Overdrive on my third account and got her to 43.  But by Saturday they had put street justice on sale, so I bought it and started a different new character, Death Ace.  As a consequence neither got to 50, and Cupcake really didn't have any power sets that I felt any overpowering desire to play to 50 again.  But I got a couple of compliments on the name. 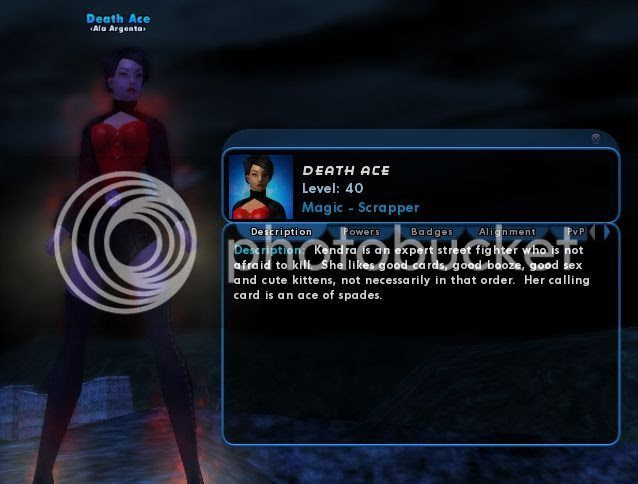 Death Ace was also on the third account, the "Dilithium Flower" account (@dark shinobu).  I only got her to 40 (during double exp weekend in August), but given enough time I would have played her to 50, I liked street justice and didn't have a 50 street justice scrapper yet. 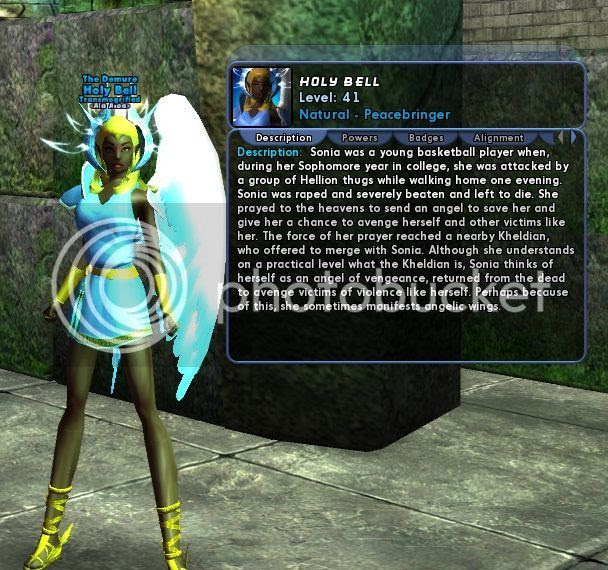 Holy Bell was my peacbringer and one of my very old characters... but I came to dislike playing peacebringers, so she got stuck at level 41.  I used her to start an Eden Trial once or twice when it was still bugged so that anyone above level 41 couldn't do it.

I always liked the character look. 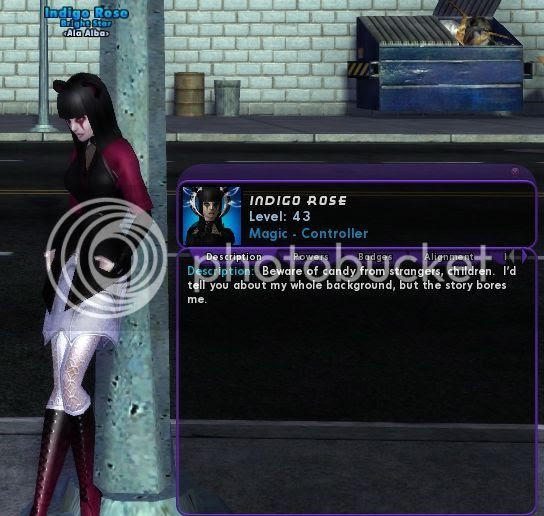 Indigo Rose was originally a member of Midlife Crisis on Freedom, and named Dark Candy or something similar.  She was level locked at 33 for a very long time.  She was one of my attempts to make a goth girl / loligoth girl.  She was also a fire / rad troller, part of a FRAD subset of the supergroup who met once a week for a while.  A whole team of fire/rads was a thing to behold.  I moved her to Virtue and renamed her Indigo Rose, and leveled her to 43.  I would have gotten her to 50 one day. 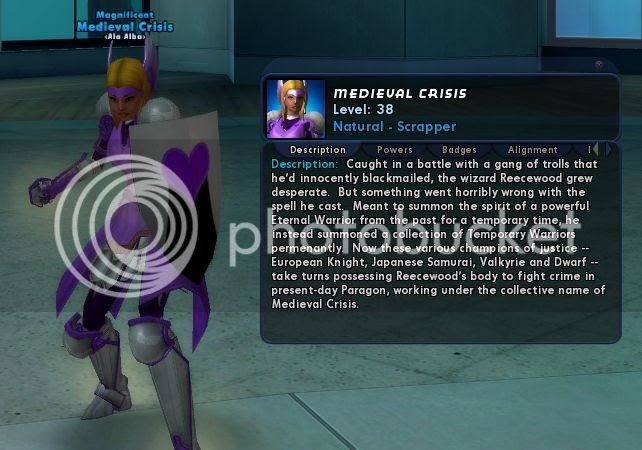 Medieval Crisis was my other Midlife Crisis toon, a broadsword/shield scrapper who was going to be level locked at 36 I think, but only made it to 32 or 33 while on Freedom.  The schtick with Medieval Crisis was that he/she was possessed by various different warriors out of time, and so each costume looked radically different.  There were so many great combinations for sword and shield that I really couldn't create enough different characters to cover them all, so this was my solution.  Medieval Crises was variously a valkyrie warror, a dwarf warrior, a troll warrior, and elfin knight, an evil dark knight, a samurai, a magical girl... fun stuff.  I moved him/her to Virtue and got up to 38, playing infrequently. 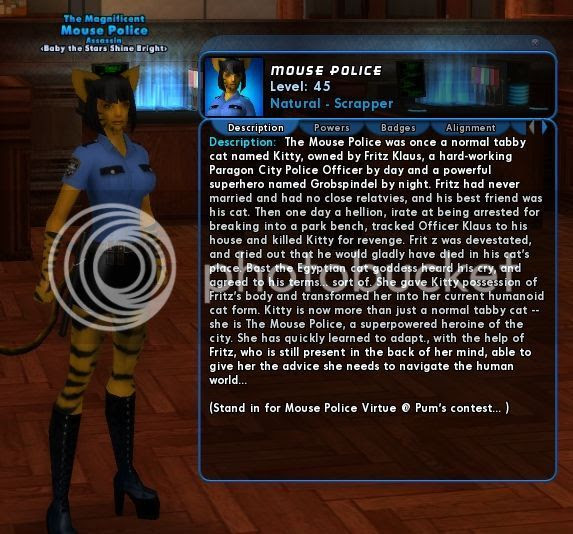 This was the original Mouse Police, originally made on Pinnacle and then moved to Justice.  She was a dark melee / invulnerable scrapper.  I got her to level 45, and would have liked to get her to 50. 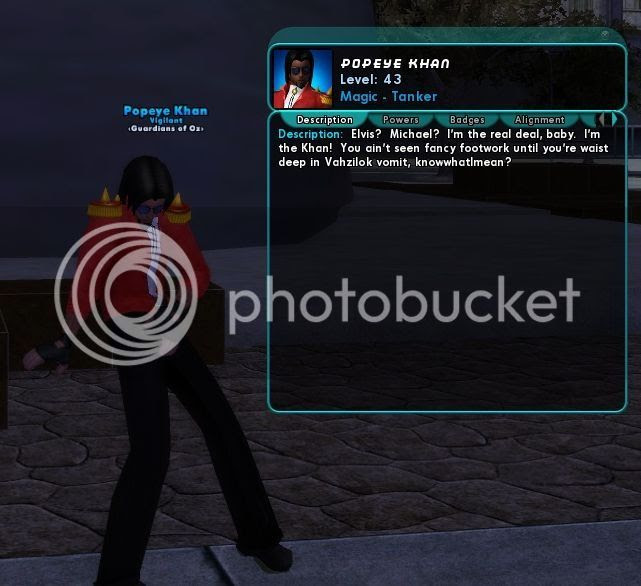 Popeye Khan was a fire/invulnerable tank.  He had the above Michael Jackson look, and an Elvis look, and a James Dean look, and a Humphrey Bogart look, and a Clint Eastwood look, and also a Marilyn Monroe look.  ^_^ 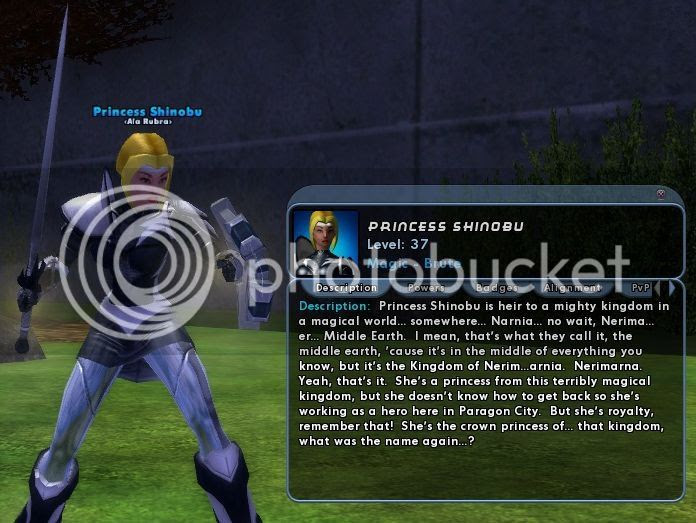 I had multiple accounts.  My plan was to someday have a level 50 on every one of them.  Aside from my two main accounts (@shinobu and @shinobu valentine) I had Dilithium Flower on my @dark shinobu account, and Shinobu Hime on my @shinobu hime account.  Princess Shinobu was the main character on my @princess shinobu account (naturally).  With her I was working on a complete store-bought IO/ATO/Overwhelming Force/Hami O build, so that she could be as powerful as any of my other IO'd characters while existing on a completely free account.  It was kind of an experiment, but it turned out to be pretty expensive to pull that off so I never finished it. 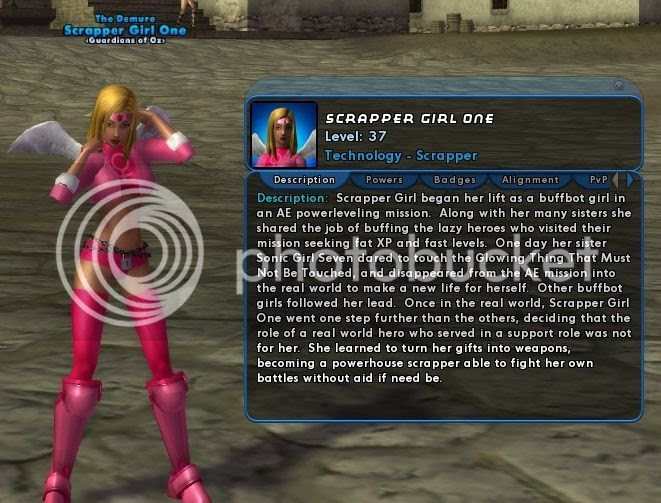 I liked my buffbot girls, and I liked playing scrappers.  It was probably inevitable that I'd make a Scrapper Girl One.  I also made a Stalker Girl One and a Brute Girl Zero later on. 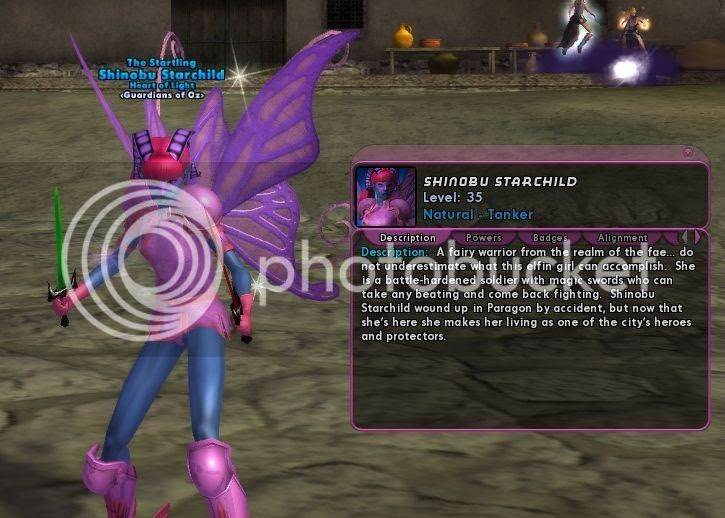 Another of my very old characters from when I returned to the game and began playing on Virtue.  This was a dual blades / willpower tank, I would have liked to see her at level 50 someday.