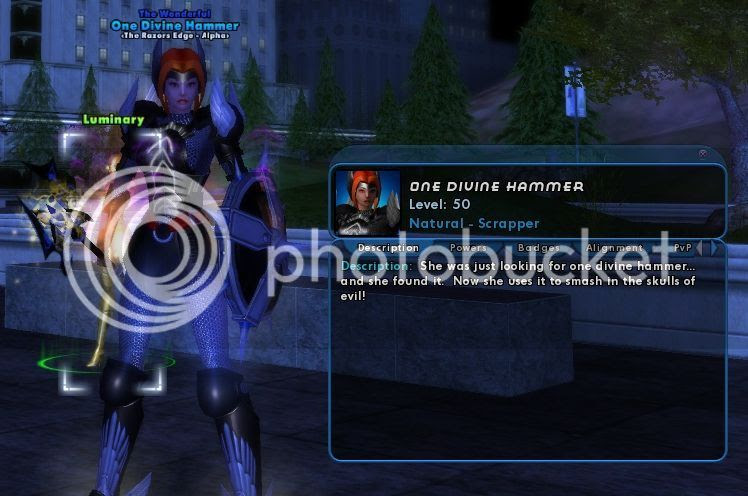 I had to work really hard to get One Divine Hammer to 50 -- I had to basically spend the last two days before the final day PLing her from 43.5.  But I wanted to have my 50th level 50, and I really wanted One Divine Hammer to be one of my fifties.  She was a pretty cool character.

I built her quite a while ago... sometime in the Spring or last Fall/Winter, I can't remember exactly.  Multiple Girl II had said that mace melee was supposed to be really powerful on a scrapper, and I did a double-take: you mean scrappers get mace?  When did that happen?

Needless to say, I had to go make one immediately.  Named after a Breeders song, she was every bit as advertised, a character who dealt massive damage and was pretty awesome all around.  The Carnival of Light mace just made it all the sweeter.  Given more time I would have polished off her build, fixed the minor endurance issues she had, and she would have made a very good farmer, maybe better than Megamisama or Trinkets.

Even though I rushed her to 50 and didn't get to play her at 50 very much, I had played her a lot beforehand.  In fact, Colbolt Avenger created his own mace scrapper, Snafu Fighter (I think the name was) after seeing mine in action.  I used her on one of Freakylicious's last Shadow Shard TFs, a Sara Moore.  I used her on several Penelope Yins and at least one Admiral Sutter TF, I think.  I got to play her quite a bit, so no regrets that I actually had to PL her to get to 50.