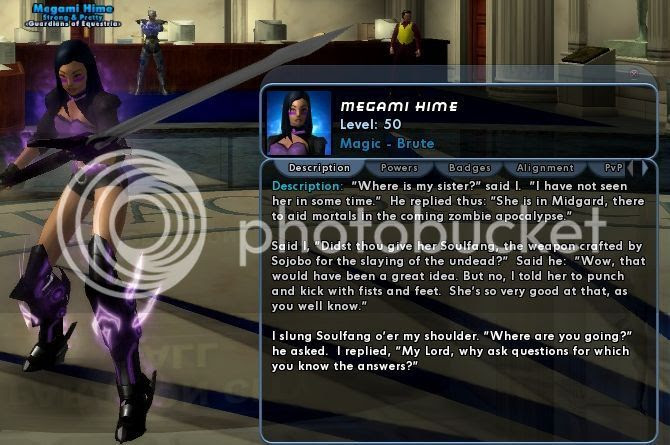 If I had to pick one single character to keep forever, it might be Megami Hime.

I built her right after Titan Weapons came out.  She was the sister of Megamisama.   They were on different accounts so that I could pose them together when I wanted.  It only made sense to me that a character with a titan weapn should be a god or goddess, and I really liked Megamisama a lot, so Megami Hime (goddess princess) was the obvious choice.

Titan Weapons wound up being one of my very favorite sets.  It was certainly a set that needed lots of IO help to function at peak efficiency, but once you got there it was a monster.  The momentum mechanic didn't bother me at all, it was the price you paid for being able to whip that massive thing around like a toothpick when momentum was up.  It was the manic depressive melee set -- you were either smashing things down with rapid attacks, or slowly winding up again as if you'd just remembered that the weapon was two-thirds your own weight.  But I loved the animations and I loved Megami Himi to death.

She was another of my willpower brutes, with softcapped smashing/lethal and energy/negative energy defense, high hit points, high regen.  She was a beast.  This is the toon I used when I decided to solo the Mender Lazarus task force at +3/8.  She was easily up to the task.  This was also the toon i used on some of my final ITFs, and on the last rikti mothership raid on Nov 30th, when Shimmer asked people to go solo and set every bomb on the ship.  She was perfectly capable of doing that, finding a gate by itself, destroying it, then killing the hoard of rikti that swarmed her before finally being allowed to set the bomb once they were dead.

She had the rare Excalibur sword, which I bought offf the market for something like 800 million influence.  It looked awesome.  Like her sister she was over seven feet tall and built like a powerful goddess should be, though I did have one other costume which was essentiall my typical Sailor Shinobu "Sailor Moon" schoolgirl build -- it was fun to see a short schoogirl whipping that sword about too!
Posted by Miko at 8:55 AM