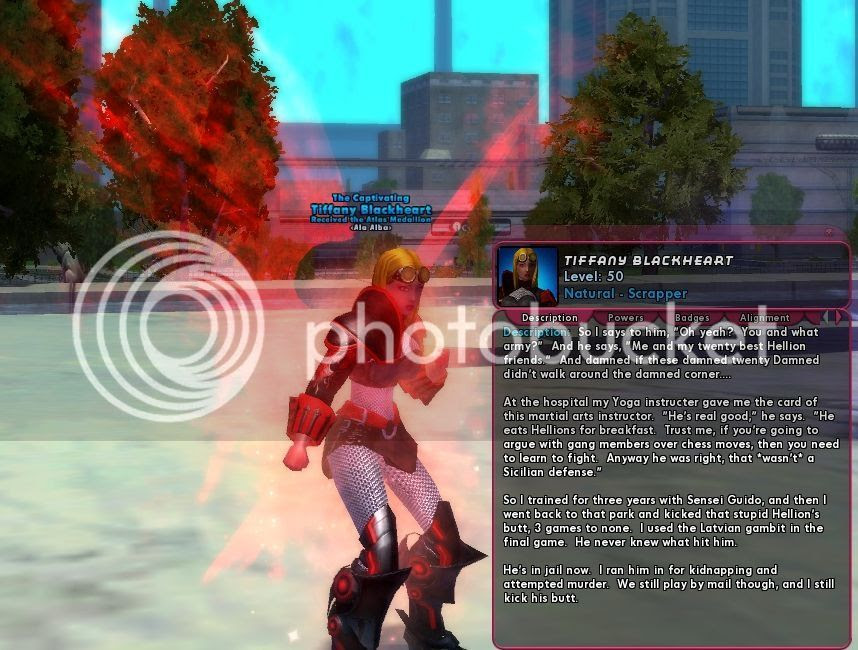 Tiffany was the first of my many level 50 martial arts scrappers.  The story behind Tiffany is as follows:  I had  created her once, played her for a few levels, then deleted her.  Later while looking through old screenshots I saw her and wanted to create her again.  She was designed to be a much chunkier girl than I normally made -- a lot of my characters were built like Sailor Shinobu, small thin schoolgirls of one sort or anther.  Tiffany was a powerful street brawler, but her original costume included hot pants (disco texture I think) that made her wide butt look extra wide, which eventually annoyed me (and is one reason I'd deleted her once).  But once I'd put her in a black schoogirl outfit, she looked like a tough juvenile delinquent, and didn't look fat or weird.  The above costume with the armor came much later but wound up being one of my favorites for her.

Martial Arts was a very fun set and I came to enjoy it immensely.  I had 4 different level 50 martial artists.  ^_^  Tiffany was also my big experiment in Leveling Pacts, something that they later got rid of and never again brought back.  I had her pacted to another scrapper on my other account, Valkyrie of Atlantis.  This meant that every level on Tiffany took twice as much experience to gain, so it was a real grind leveling her up.  When I was done, she was one of my most-played characters.  I played her trough all of the Croatoa and Striga Island arcs (one of the benefits of slow leveling), and this caused a diliemma when we had a double experience weekend while I was still working on these.  I had to stop playing her for the weekend, and started up a different MA scrapper since that's what I wanted to play.

I eventually gave Tiffany a very tough defense-based build that softcapped for smashing/lethal and also energy/negative energy.  She remained one of my favorite toons, and since she was a rogue after GR came out, I got to play her more when I wanted someone to play redside.
Posted by Miko at 1:38 PM