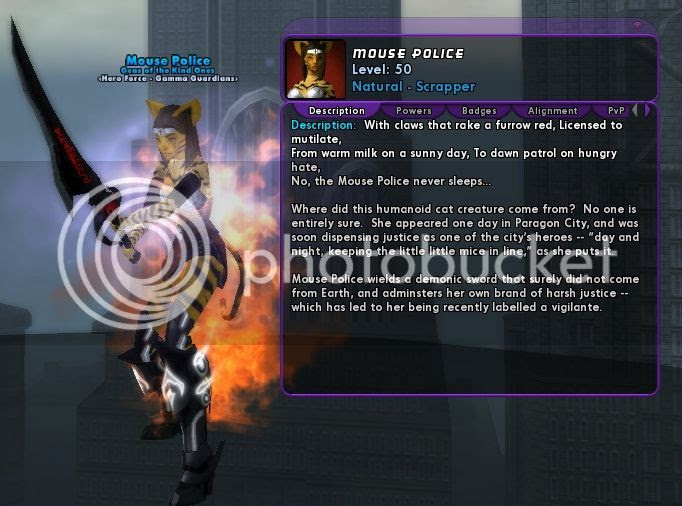 When I returned to the game after a year and a half absence, I picked Mouse Police on Virtue to be my next character to play to 50.  She was a katana/regen scrapper and therefore a duplicate of Organica, my first ever character who for a long time remained on Pinnacle stuck at level 37.  I played Mouse Police to 50 and continued to play her for a long time after as my main.  She was the first character I IO's with set IOs, which I had to do several times over as I learned how to actually do it right.  I tried for a defense-based build but ultimately went to a recharge-heavy build, which suited regen with its four click heals.  She had about 15% melee defense though, and with the katana parry could push that to 45% in two hits in just a couple of seconds.  She was not one to tank or take on hoards of enemies, but she was really very tough and exceptionally good at dealing damage.

She was also my main badger.  I fretted over this a bit, because she didn't have one of the early anniversary badges (the first, I think) that Organica and Jalia and a few of my other characters did, but ultimately I shrugged that off because she was now my main.  Later it became more of a problem again as I grew disenchanted with katana/regen and ultimately didn't play her for a couple of years, so I was way behind on my badging before the final three months and was still missing badges that would have been easy to get if I had more time.

I gave her many costumes over the years, but the one above wound up being my favorite.  She finished the game at 1251 badges, which I was happy with, though I could have added more than 100 more.  She was about 98% complete on one of the last day job badges she needed when the servers came down.  I left her parked at the hospital in First Ward, working on that badge.