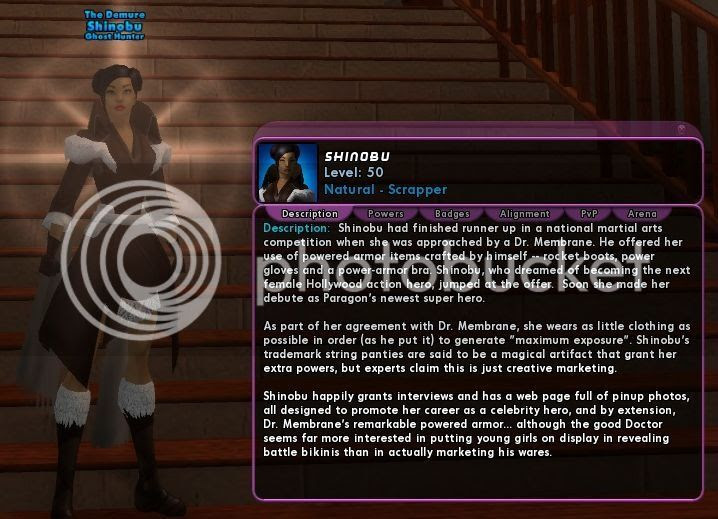 Before there was a Tiffany Blackheart or a Nina Ballerina or a Jalia (all MA/WP scrapers), there was Shinobu.  Or rather, Shinobu Dragonfire, my (initially) half-naked MA/Invulnerable scrapper.  She took a slow road to 50, but by the time I finally got there and IO'd her out, she was, for a short time, one of my toughest and most fun scrappers of all.  She was one of the first toons I had who could roll at +4/8 and be just fine, though as a martial artist she was not a high AoE damage dealer and killing large groups took time.  But I loved firing up a Council radio mission and stomping through it with her.

Because I had so many martial artists, I eventually moved her to Exalted where she could claim the name Shinobu.  I only really played her once while there -- I joined a "speed" Khan that took almost two hours.  That kind of convinced me not to play a lot on Exalted, actually, which is too bad because I went to the trouble of revamping her build to make her even tougher after moving her there.
Posted by Miko at 2:25 PM