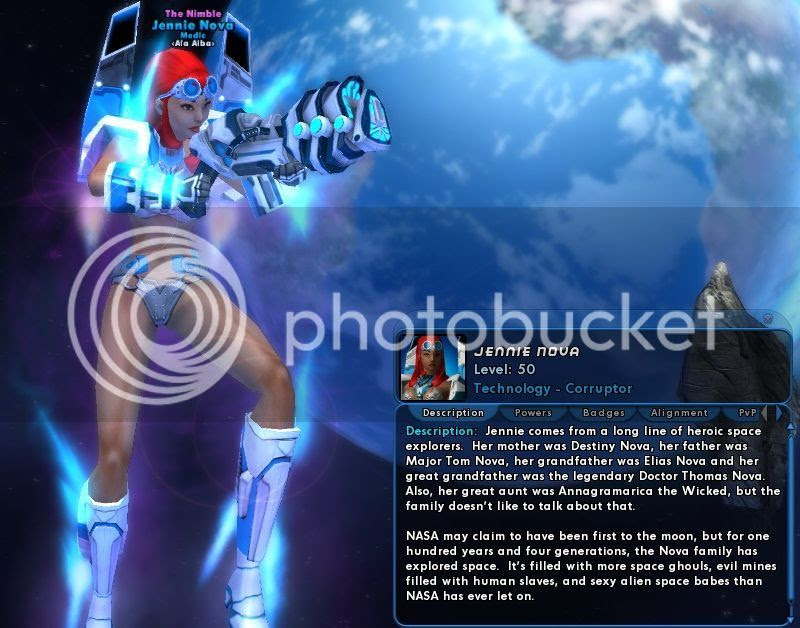 In the Spring of 2012 the Magesterium Trial was new and people were trying for the Really Hard Way badge, and corruptors that could debuff were greatly desired, so I set out to level up Jennie Nova, a character that I'd created back in the Fall/Winter when beam rifle first came out.  She was beam rifle / radiation, and I thought she would make an excellent addition to these kind of raids.

I managed to get her to 50 in July.  She was one of my favorite corruptors -- I liked the name, I liked the look, I loved the bio, I liked beam rifle for the most part, and radiation was always welcome.  When we had a CoP that looked like it was about to fail, I brought in Jennie and two others grabbed their rads, and it went from impossible to actually rather easy.  Rads were that good.

I never managed to incarnate her or take her on any incarnate trials, but I did use her on other Cathedral of Pain trails.  It was always a good idea to have rad debuffs.  She had the usual money-is-no-object build, and  was just a lot of fun to play.  She was my favorite corruptor after AE Baby, and given time I would have played her a lot more I'm sure.
Posted by Miko at 9:50 AM