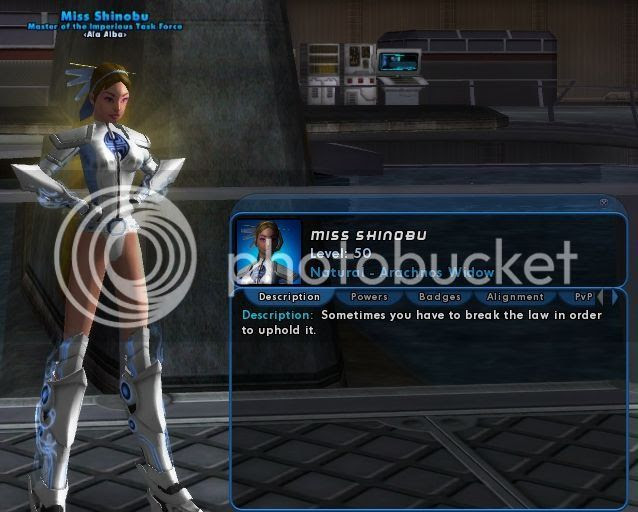 I had several widows already -- in fact, I had one that I levelled to 27 in the fist three weeks that Soldiers of Arachnos came out. I remember that I pushed very hard to get Huntress Midnight up to 50 so that I'd be able to create an SoA, and I think I didn't actually hit 50 until a few days after they appeared.  But it was an amazing time to find teams redside, every team was at least half SoA and you probably know what that means, +team defense, +team accuracy, +team damage all multiplied to infinity.  Or close enough anyway.  I levelled a widow to 27 and then a crab to 32... and then I got disstracted by other projects.  I created more widows though, they were my favorite, especially with the butt cape.

But when it came time for a new overpowered character project -- this after I'd fashioned Sparks Fly and her near-twin Trinkets into AoE monsters and purpled out Squiddy Kitty -- I settled on a powerful widow build by Top Doc capable of soloing AVs and the like, and then I created an entirely new widow on my 2nd account.  This was Miss Shinobu, and I stayed focused this time and got her up to 50 quickly and fully IO'd with money being no object (my typical build approach after I did that with Sparks Fly).

Miss Shinobu was amazing to play, a claws scrapper with stealth, less hit points, but amazing team buffs.  I really really enjoyed playing a widow.  This was the character I picked for some Mo runs and other things where what you brought to the team really counted. For me this was the perfect mix of melee capable of running off and soloing, and team-oriented character with buffs.  Widows were just awesomeness squared.

I probably should have used her for the Brickhouse Chat final photo because everyone knew me by my global handle Shinobu.  Anyway, I will miss being able to play her.
Posted by Miko at 8:05 AM