After the Apocalypse part 1


So it's morning and I can't log into my favorite game ever again.  I have a whole morning in front of me and I'm not sure how to waste it, because before today I would have wasted it playing City of Heroes.

I should get some writing done.  My goal for NaNoWriMo was to write 30 Grandpa Anarchy short stories in 30 days.  I started 30 and completed 24.  I still have a few to finish, including "Two-Fisted Christmas Ghost Story" which is an important one to complete since my friends host a Christmas Ghost Story writer's night every December.  I've completed stories for these parties before, usually ones set in the Tales of the Tai-Pan Universe.  Some of those I'm very proud of, and all of them have been published in issues of the Tai-Pan.  I also worked on a Yuleman vs. Anti-Claus story -- I read the first part of it one year, then a ear or two later tried to finish it, but the start was much better than what I came up with to continue it -- it was far too long and complex for what it needed to be.  It really needed to be like most of my Grandpa Anarchy stories, a setting, some funny lines and characters, and then get it over with quickly.  I might go back and finish it one day, but this year my entry will be a Grandpa Anarchy story.

But right now, all I really want to write about is City of Heroes.  So that's what I think I'll do.

Me, Comics, and Heroes

To begin with though, I want to trace how I came to the game.  And to do that properly I'm going to go waaay back to how I came to super hero comics.

Back in high school (Salem Academy) I was on Yearbook in my junior and senior years.  When I was a junior, one of the seniors was Greg Wadsworth.  Greg loved comics, especially alternative comics.  He was a big fan of Cerebus the Aardvark.  I wasn't into comics at the time -- to me, comics were what my mom bought us kids to keep us occupied on a long car trip.  I'd read golden key stuff like Scrooge McDuck and Richie Rich, Casper, Turok, various "true ghost stories" and Tom and Jerry and I don't really remember what all.  It was always random issues, I never read anything in continuity, my mom would just buy a collecting of bundled comics and we'd have something to read.

Greg Wadsworth started his own comic book.  This was back in the days before the internet explosion and before self-publishing was at all easy; I remember it was about $1,500.00 to publish the first issue, or something along those lines.  His parents helped.  His comic was called Ismet, and was a space opera story of anthropomorphic animals controlled by evil humans, and a dog who was out to liberate them.  And save his girlfriend, I think.  Here's an promo ad for it.

Greg was clearly inspired by Cerebus, and his art was crude, but at the time I was extremely impressed that he was actually publishing a comic, and I really liked it.  In fact, reading his comic is what got me to go looking for other comics like it, which lead me to Cerebus and Elfquest, two of the only independent comics in existence in 1981.  I liked both, but it was Elfquest that really captured my imagination.  I imagined myself as one of the elves in the comic.  I joined the fanclub.  Eventually I started a fanzine and convinced a lot of my friends to join, and we published for about 28 issues of Lone Oak Holt's Lone Oak Legends, I think.  I became a marginally better writer and met a lot of talented people, and had a lot of fun.

After I graduated high school my family moved to Longview WA, and the friends I made there were all into super heroes.  I'd never read super hero comics, but I was an avid gamer, and what they all played most of the time was a super-hero game invited by one of my new friends, Gene Breshears.  His Super Heroes game was created because at the time there wasn't anything else he could use -- GURPs didn't exist, Champions wasn't published yet or was just coming out, Villains and Vigilantes was out but wasn't really what he was looking for.  His system was a quick and dirty game similar to original Dungeons and Dragons in that you could roll up a new character in 15 minutes and join a game right away.  It's hard to stress how valuable that kind of thing is -- Champions was cool in that you could imagine whatever hero you wanted and then fit it to the rules, but it took 2 to 3 hours to create a character and required the aid of the GM or someone who really knew how the system worked.

Anyway, I had a lot of fun creating superheroes for Gene's game.  I drew pictures of them too. 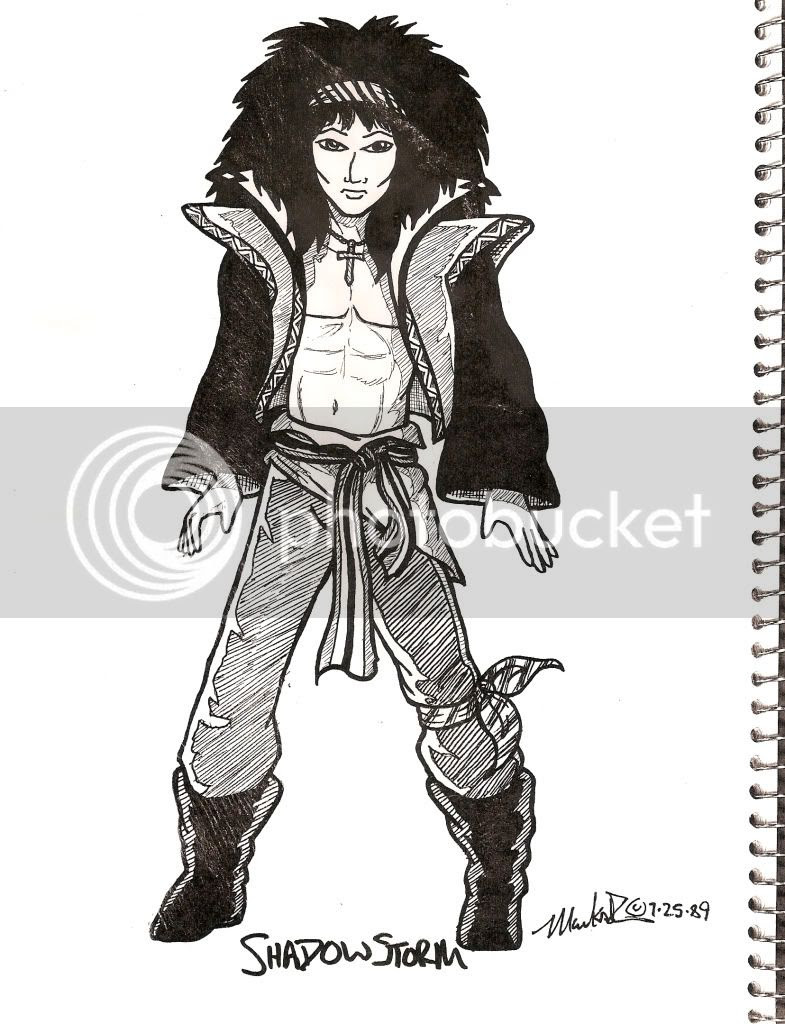 Shadowstorm and his sister were the first two heroes I created.  I forget exactly what their powers were... they were twins who were supposed to look similar, but Shadowstorm was my character, the sister was just a background character that I wrote up in his backstory. 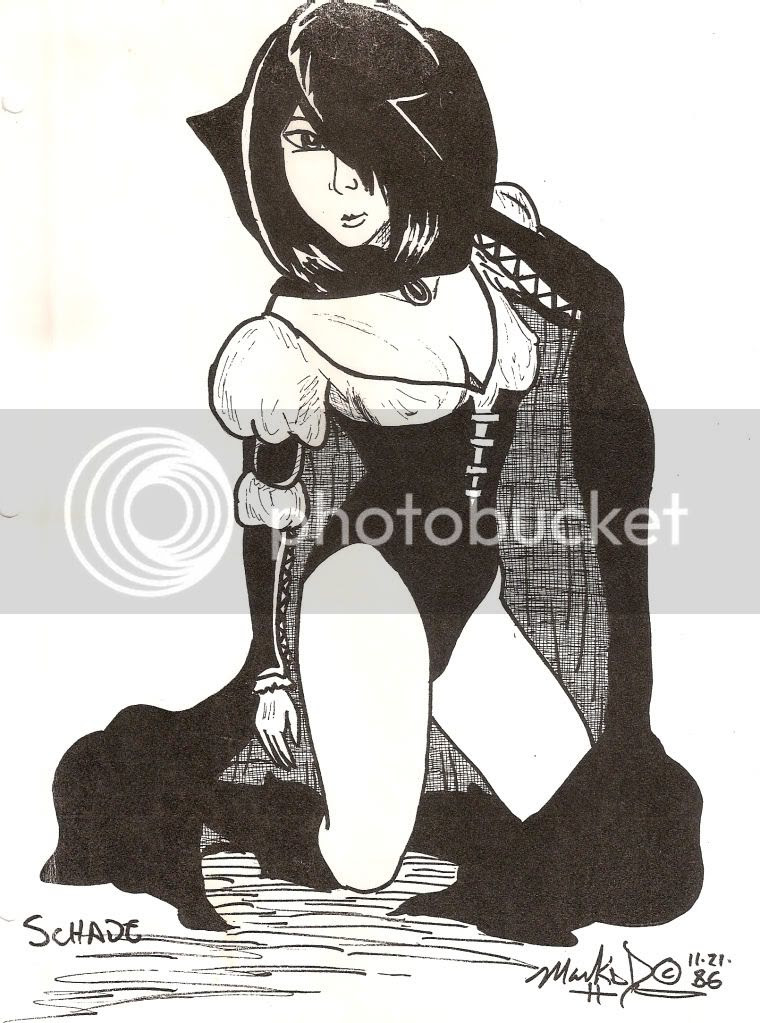 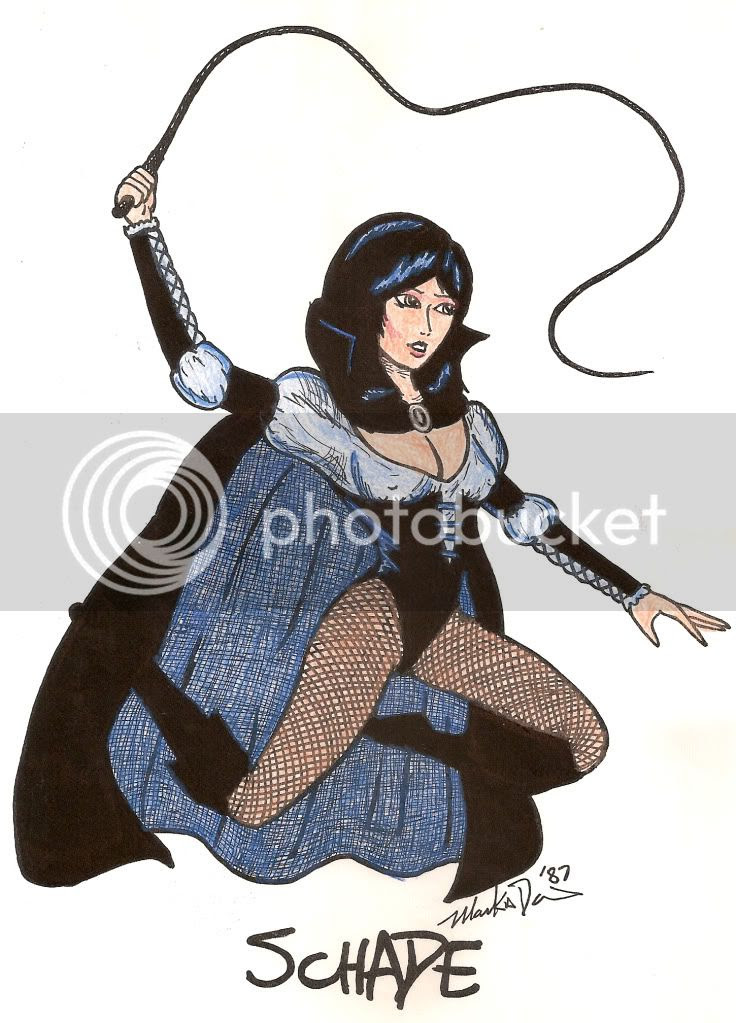 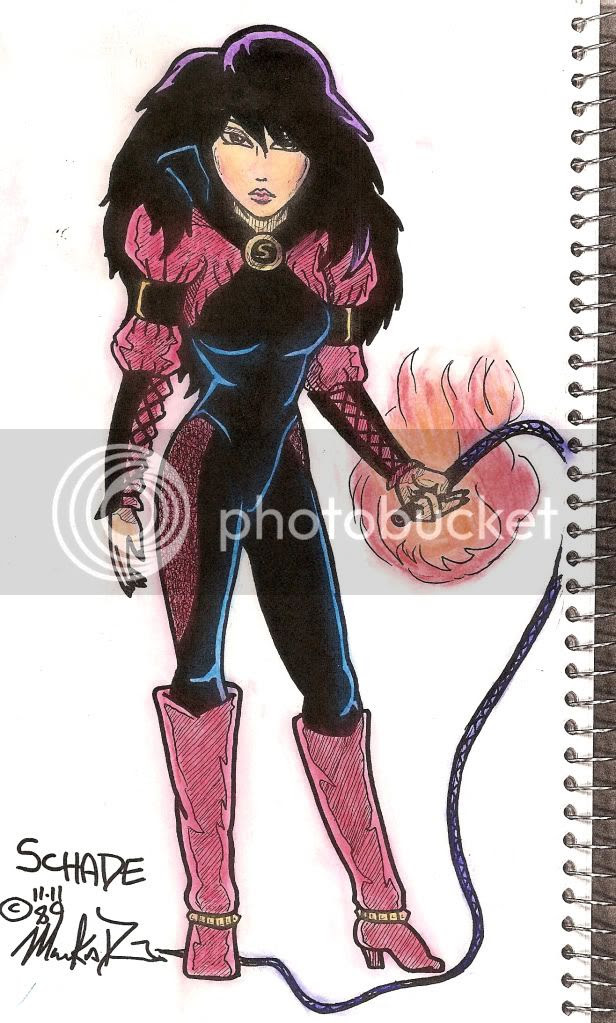 Schade, however, was my main hero for most of the campaign.  She was an illusionist... with a whip I guess. I just remember that she created holograms that could be photographed, could use this to appear to be different people, could remake an entire room or even create sets for a movie.  She had designs on using her powers in Hollywood -- she was a one-woman Industrial Light & Magic.

I drew pictures of a lot of my friend's characters too.  We had a super hero group that fought crime for several years every Saturday.  Members included Prospero (our leader for most of that time), Monsoon, Maelstrom, Livewire, Pulse, Eidilon, Flame Masters, Stealth, Force.  Gene's own primary hero from the early days of his campaign was The Shroud, a fencer in red tights and a cape with a black skull on his chest. He was kind of a throwback to the days of the Phantom, the Shadow, and old-school Batman I think.  One of Gene's friends from Longview was an excellent artist and did a beautiful oil painting of The Shroud running along a waterfront with his sword drawn.  It's pretty awesome, Gene still has that of course. 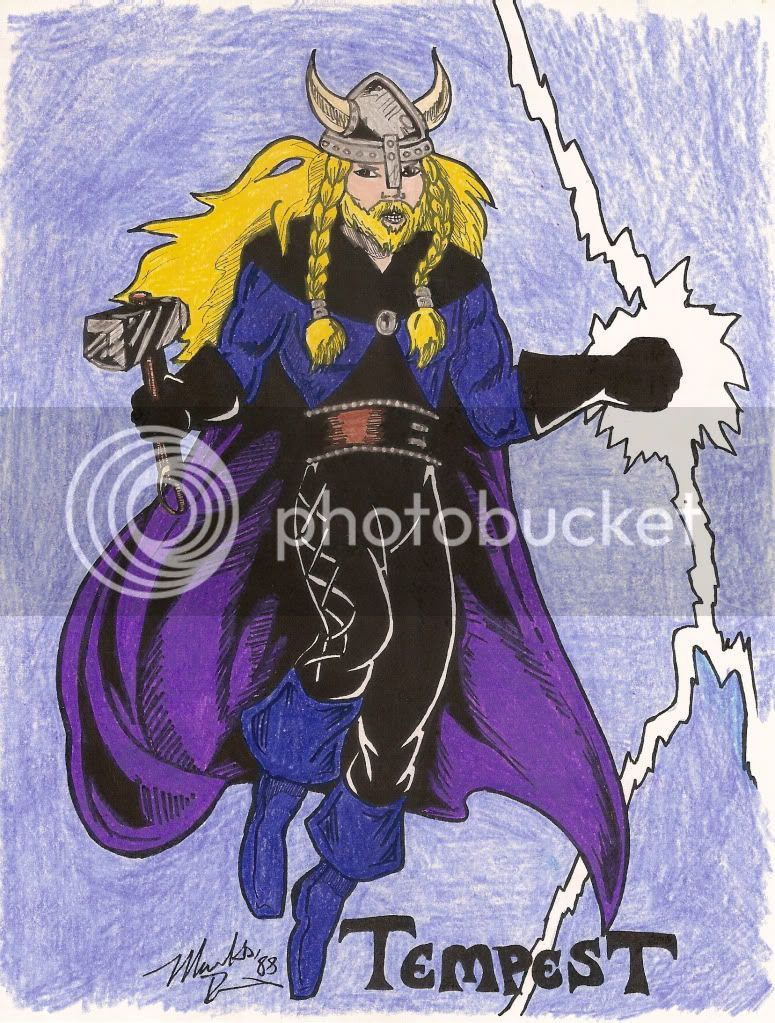 (One of my backup characters that I sometimes played -- borrowing a great deal from a certain storm god, heh.)

Anyway this game was the thing that really got me into super hero comics, and I started collecting comics finally.  I collelcted X-Men and Alpha Force and a few others, but I was always more interested in newer alternative comics.  Nexus and Grimjack were two of my favorites, and Badger.  I also got into non-hero comics like Albeedo and Usagi Yojimbo and things of that sort.  Usagi Yojimbo remains the only thing I still pick up at my comic shop that is an actual comic -- everything else these days is a manga volume or graphic novel, or dvd video.

But I still wasn't a super hero junkie.  It was something I liked, but not something that drove me.  I also wound up working on the Tai-Pan with friends due to my connections in Elfquest fandom and desires to do something different, and that brought me into furry fandom circles, but again this was something I enjoyed, but it didn't drive me.  When City of Heroes was about to come out, I wasn't seized by a burning desire to buy it instantly.  I didn't think, "Now, I can finally become the hero I've always wanted to be!"

But I need to backtrack a bit to explain how I got into MMOGs at all.  Playing MMOGs had certainly driven me over the years, and I wasn't exactly a huge gamer before I encountered them.
Posted by Miko at 9:24 AM