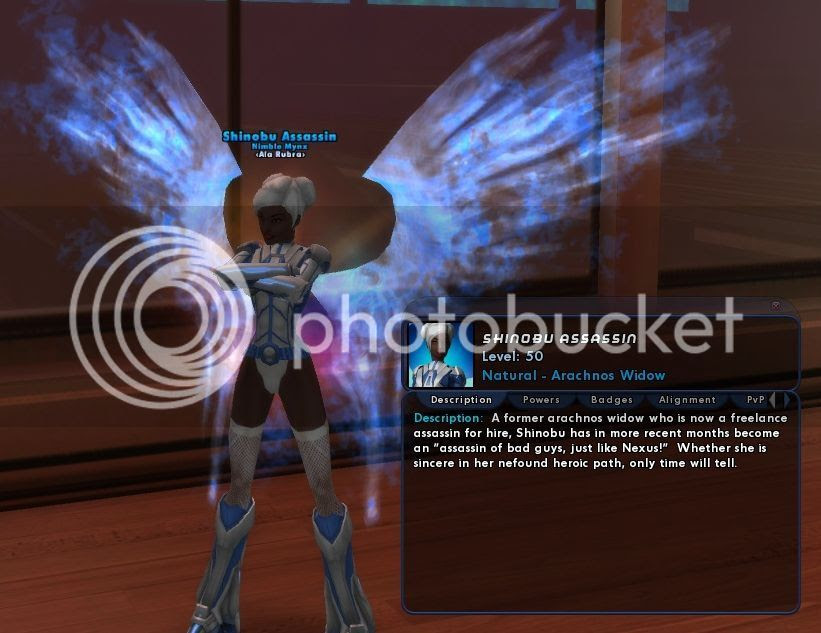 I loved playing Miss Shinobu my widow so much that I decided I needed a similar character on my main account.  Thus Shinobu Assassin was born.

I only made a few changes in the basic build.  For Miss Shinobu I followed Top Doc's build to the letter.  He did not have Eviscerate in his build because of the activation/animation time, he couldn't get it down long enough to fit into his attack chain, and his widow build was entirely built around fast attacks and enough recharge to chain them quickly and take down AVs, Pylons, etc.  I got into several arguments with people over this.  "Why didn't you take Eviscerate"?  Nobody seemed to understand that I was already capable of soloing AVs, and at that point, what else mattered?

But I was aware that everyone considered Eviscerate one of the best widow attacks, so the idea for Shinobu Assassin was to take that.  I reworked Top Doc's build a little.  Shinobu Assassin had a little more ranged ability as well -- she could actually chain ranged attacks as easily as chain melee attacks, which was sometimes quite nice.

Other than that, she was nearly interchangable with Miss Shinobu.  Both of them were fun to play, and they wound up being my only two level 50 SoA's.  I had plans to level up a crab (I had two in the 30's), a bane (Barbie Bane was in the 30's), and a fortuna (Sorceress Shinobu, 32) but ran out of time.  I would have also done a huntsman just for the sake of completeness.  These and my peace bringer Holy Bell, 42, were the last ATs that I didn't actually get to 50, but I had at least the 1 kheld and 2 SoA.