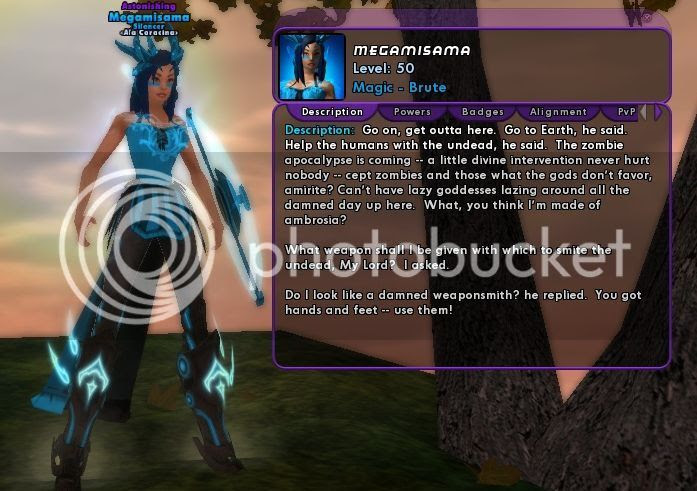 When it came time to try the new powersets coming out, I had made Shinobi Shinobu using Street Justice, and I loved the set enough to want it on a brute.  I was really into brutes by now.  I'd discovered the name Megamisama was free on Virtue, (meaning literally "goddess" or "honoured goddess")  and so Megamisama was born.

I loved shield defense almost as much as I loved willpower, so Megamisama was street justice / shield.  And after many many short, skinny, young-looking girls (even the ones with curves like the buffbot girls were on the short side), I decided that a warrior goddes would be tall and voluptuous and muscular and powerful.  Megamisama was around seven feet tall, maybe over.  She was definitely no little girl.

This character got a biuld modified from my Sparks Fly / Trinkets build, a shield defense build that gave me softcapped defense to three positions, massive global recharge, and massive damage.  Money was once again no object.  I could farm with Megamisama as easily as I could with Trinkeets, and sometimes I did.  And I really liked playing her.  I played all of my brutes quite a bit, and Megamisama was no exception.

I just loved everything about this character, the look, the various costumes, the backstory.  Street Justice was a really fun set.  In the end though, it was Titan Weapons that I truly loved, and I think I only had one other street justice character, Death Ace on my third account (who made it all the way to 40 in August 2012 during the double experience weekend, and then never went any further.)
Posted by Miko at 8:43 AM