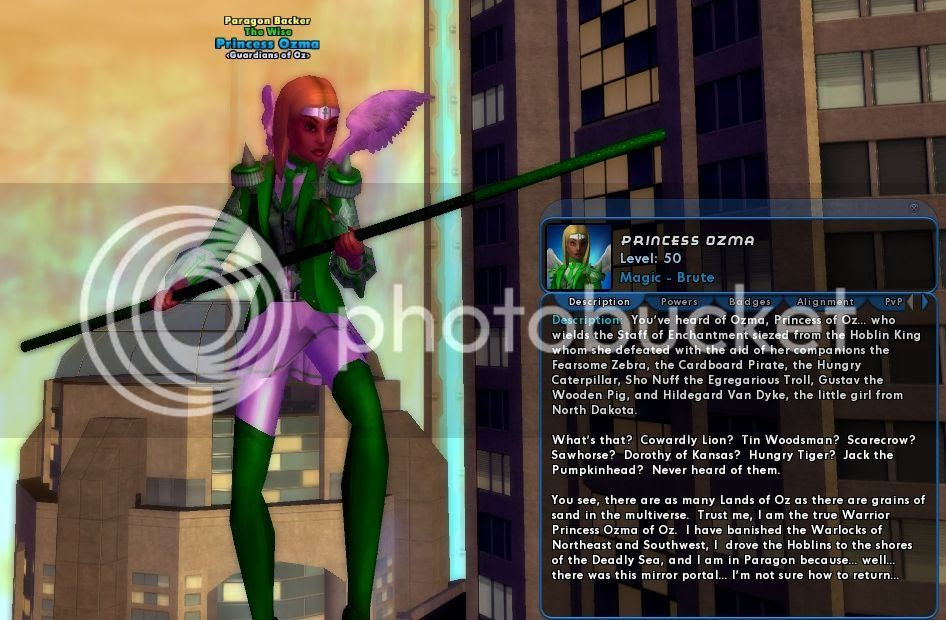 I had so many plans in August for what I was going to do next.  On August 24th I updated my "CoHgoals" list.  One part covered the "DFB Challenge" I was working on to level 7 different characters on 7 different accounts all to 50 via DFB only.  Another part covered who I should use to run SSA 1.1 each day, who was in charge of which of my solo SGs, and who needed what to complete task force commander.  And there was a list of characters that I wanted to work on getting up to 50:

All of this changed on August 31st, of course.  In the morning there was a big giveaway of costume codes and I managed to grab one and I was really, really happy.  It was Friday, I was looking forward to the weekend.  Then at lunch I  checked the forums again... and my swung mood changed 180 degrees.

Once I had managed to absorb the depressing news (sometime Saturday I think), I began to plan out what I really wanted to accomplish in the last three months.  Top of that list was playing those characters from the above list to 50 that I really, really like and/or were on sets that I'd never previously played.  This meant that, as much as I'd have liked to get Cupcake Overdrive and Death Ace from my third account to 50, they weren't important.  Getting a 50 spider or bane or fortuna wasn't important.  Getting Sakura Thirty to level 30 (where she was to be level-locked, in order to roll level 30 recipes) was completely not important.  The sisters of Destruction Diva?  Not important.  Vashti Ahandra, who would have been my first level 50 dual blades?  Not important enough.

Princess Ozma was both a character I really, really liked, and embodied two power sets I hadn't played before:  Staff Fighting, and Energy Aura.  She went on my project list first and foremost, followed by Forest Goddess, who was nature affinity / water blast, and then followed by Eternal Sweeper and One Divine Hammer who I liked quite a bit.  But Princess Ozma was priority number one.

Plus, she was a brute.  I loved my brutes, one more was clearly in order.

What I loved most about Princess Ozma though, was the name and the look and the bio.  I was always a huge huge Oz fan.  I read most of the Oz books when I was in 7th and 8th grade by checking them out of the Salem public library, and they were oversized children's books, and I was self-conscious like any kid that age about being seen to enjoy anything that was childish, but I'd still carry the books to school and read them during pep rallies while trying to hide what it was I  was reading.  Not long after, Del Ray reissued all of the Oz books, and I bought the complete collection, all 14 Baum Oz books in mass markeet paperback.  Much later I bought all of the Del Ray versions of the Ruth Plumly Thompson Oz books, and I now own nearly every of the "famous 40" or "cannonical 40" which are not really cannonical in my book, but those are the 40 books published by the original publisher.  And I own a lot of other Oz books too, and Oz comics, and I've written a couple of Oz-related stories myself.

So... yeah.  Princess Ozma.  I loved her not for what she could do, but just for the name, look, and character.  Sometime in July I also won an Oz-themed costume contest with her, so others liked the entire package too.

As for what kind of a fifty she made -- well, staff melee was less impressive on a brute than it later turned out to be on a stalker, but I still enjoyed playing her.  Energy Aura was a nice enough set after all of the changes, I came up with a good softcapped build, but I didn't like that the powers obscured my character.  My old complaint -- can't see my character clearly -- meant that I probably would never again have made an Energy Aura character.

I used Princess Ozma to run through all of SSA 1 and SSA 2, and she was very well-suited for that.  I took her on some ITFs and hami raids and the like.  She was fun to play, but I loved the character for reasons besides that.