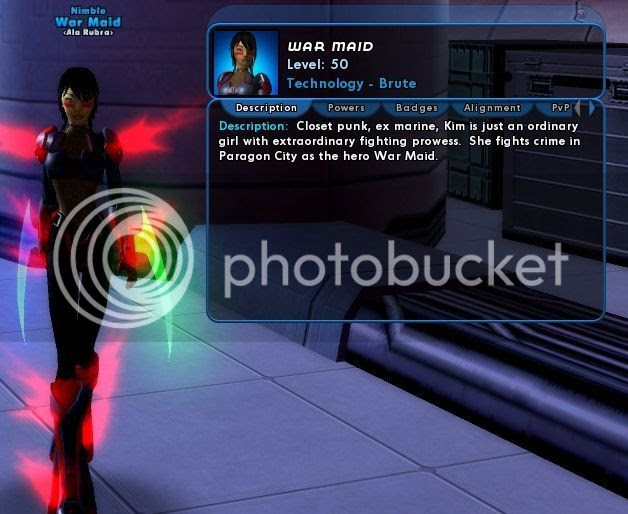 Now we come to the second in my series of brutes.  There came a time when I realized I have about 10 or so level 50 scrappers, and 1 brute, who at the time was still a squishy brute that I didn't much like to play.  But I knew that brutes could be very powerful and fun, and I wanted to get another to 50 -- or several.  War Maid was the first such project, a claws / willpower brute (I always loved willpower, it was extemely powerful when properly IO'd with defense, increased hit points and increased regen.  Plus you could still see your character!)  Claws was supposed to be a really  great set on a scrapper or especially a brute, and it turned out to be just that.  War Maid was a ton of fun to play.  Ultimately, all of my brutes were a ton of fun to play, and I became more of a brute fan than even a scrapper fan, though I still loved scrappers.

War Maid could solo just about anything.  She was perfect for a rikti raid, could tank multiple Magi.  Plus the costume I came up for her was just awesome looking.  I'll miss her quite a bit as well.