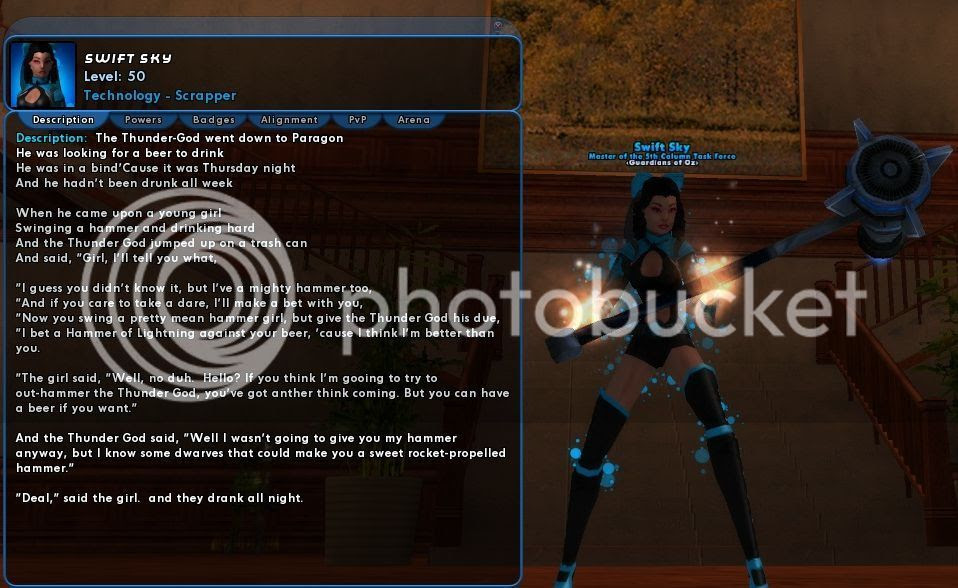 Although I had other goals on who I'd like to get to 50, I was compelled to make a new character in the last months of the game.  I had grown to love Titan Weapons too much, I needed at least one more with that set, and I saw a costume that I adored, and so I created Swift Sky, who ultimately looked very different from the costume I'd seen.  But she looked cool, and I was really happy to play the TW set again using a jet-powered hammer instead of a sword.  I know it didn't make a real difference, but stylistically it did.


My only problem with the character was horrendous endurance issues.  I had wanted to try out Titan Weapoons on a scrapper, but my problem was that on a brute I got Superior Conditioning and Physical Perfection (Energy Mastery epic pool) which aided endurance quite a bit, while on a scrapper you were offered the Body Mastery epic pool, which contained Conserve Power which I hated because it was a click power.  Thus my scrappers always went Blaze Mastery for char/fire blast/fireball instead.  I'd slot Basilisk's Gaze in Char for the 7.5% recharge, and usually five pieces of Ragnarok in fireball and five pieces of Apocalypse in fire blast (or something else like Thunderstrike if I needed ranged/energy defense bonuses.)

I did this on Swift Sky, and the results weren't pretty,  She was an endurance hog, despite everything else I included in my build to help mitigate that.  Given time I would have rebuilt her and probably have taken Conserve Energy and would have fixed the problem, but there wasn't the time to worry about it, so after she reached 50 I mostly set her aside.
Posted by Miko at 10:58 AM