Market:  Sold the last of my Efficacy Adaptor IOs.  I had 20 of them total, and they don't make a ton of money but at least they sell for a profit.

Levels:  I joined a team running radio and tip missions and gained two levels.  At one point, everyone on the team was a villain AT.  That's kind of what this game has come to -- go heroside to find a team, join a team full of villain archetypes.  :D

This was the kind of team that liked to turn the difficulty up very high, but it was not the kind of team with a brute or tank that could actually handle it.  Our leader was an electric/electric brute, no set IO bonuses, so very squishy.  I have a level 50 electric armor tank, I know the feeling.  This became a big problem when we ran a Nemesis mission with all of their AoEs, but even after that on a Council mission we had multiple team wipes.  Also, I was forced into more of a healer role, since our other corrs were /traps and /storm, but a kin healer against +3 and +4 is really asking for trouble.  So we added another kin corr.  /em sighs.  Anyway, after multiple team wipes in the jail cell Council room (nobody on the team seemed to have any defense to speak of), I went and got my scrapper Nina Ballerina and kicked their Council asses, and then stayed with the team for another mission until everyone was out of debt.  ^_^

But before that, I'd hit 26 on AE Baby.  I figure if I do nothing more than gain a level a day I'll hit 50 by the end of August.  But I expect to do much better than that with the way I play, and with double exp weekend coming up.  I should have time after hitting 50 to concentrate on finishing IO'ing the character and running some incarnate content.  ^_^ 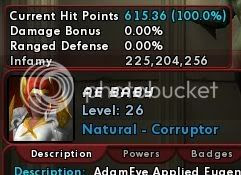