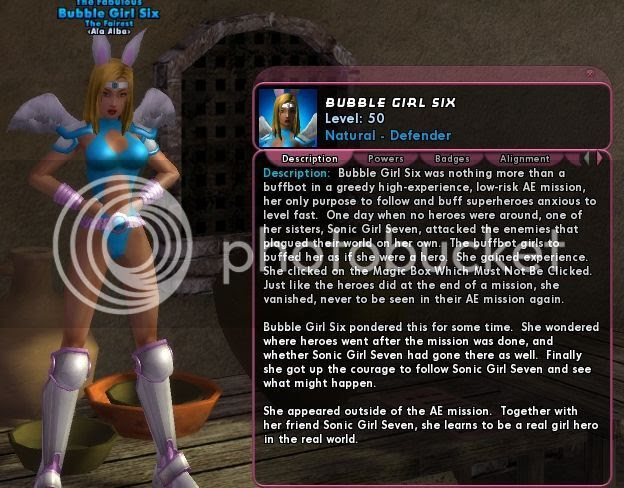 After running AE Boss farms and then the Annhilius farms with the Master Mind boss pets in them... my mind began to wonder about all of the buffbot girls that always populated these missions, and I created Sonic Girl Seven, an escaped buffbot girl.  I created her bio and leveled her up to 30 something, and I was really enjoying the whole thing.  And I thought, I should have one of every type of buffbot girl!

Thus was born Rad Girl One, Kin Girl Two, Fire Girl Three, Dark Girl Four, Empathy Girl Five, Bubble Girl Six, Ice Girl Eight, and Pain Girl Nine.  Empathy Girl was an old level 25 empath that I'd created on Pinnacle years ago whose original name was Jalia Genie (she had a genie outfit).  The others were all brand new, and they all looked identical.  At the time only five costumes were possible, so I created four different looks for my buffbots, and they were allowed their own unique individual costume if they got above level 40.  I really did intend to play all of them up too -- I PL'd all of them to level 20 or 22 to start with, and several of them remained there for the rest of their existence.

Bubble Girl Six was the first of the lot to make it to 50, even though Sonic Girl had such a big head start.  MG loved having a bubbler on the team so I was asked to bring Bubble Girl along fairly often.  I gave her a really good build too, softcapped defense to all three positions which is entirely possible on a bubble defender, even fairly easy.  I had been a video of a bubble defender herding on the tower rooftops in the last ITF mission by using the replusion bubble and flying around, and I always wanted to do that -- Bubble Girl should have been able to too, but I never actually tried it.

Once MG stopped playing, I rarely did anything with Bubble Girl.  In the last few years of the game force field defenders were pretty much considered anachronistic, an Ice defender could do so much more.  She was still a cool character to play though.  I'd taken her on rikti raids before and used the bubbles in the center of the bowl to keep everyone squishy safe, and the rikti on the perimiter.
Posted by Miko at 8:06 PM