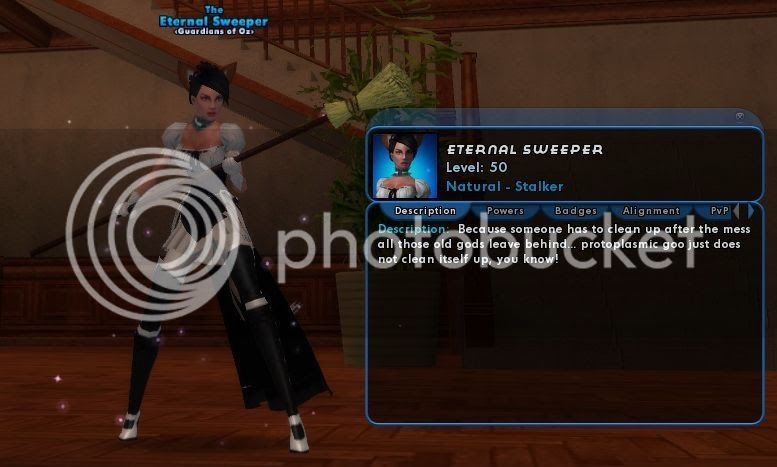 I really liked Eternal Sweeper -- the costume, the concept behind the character, and also the sets, staff fighting and ninjitsu.  Staff was one of those sets that seemed a little lackluster on a brute (or a scrapper, I believe) but really shined on a stalker.  Eternal Sweeper was deadly with her broom.

This was one of the characters that I decided on Sept 2nd that I had to get to 50... and then it took me almost three full months to accomplish it.  I got her to 50 in the last few days before the end, and didn't really get the chance to play her very much at level 50.  But I had played her an awful lot on the way up so that didn't matter so much.

This was only my second level 50 stalker, but both were a lot of fun to play.  I'm sure I would have made more.  I wanted to give Kinetic Melee a shot on a stalker, it was supposed to be really awesome on them too.  But alas, no time.

But I'm really glad I manged to play Eternal Sweeper to 50, she was among my favorite characters.
Posted by Miko at 11:48 AM