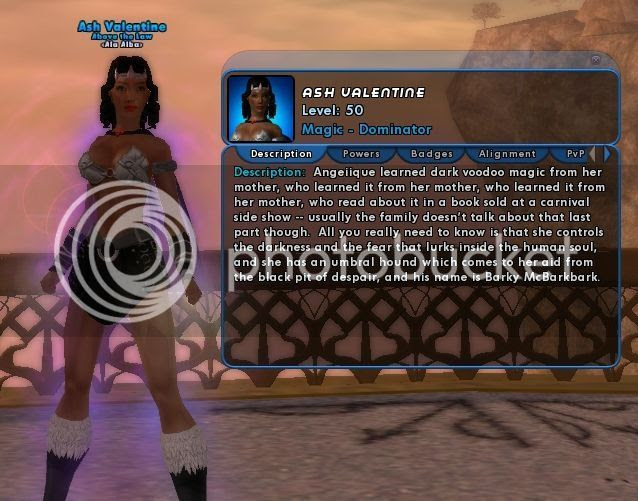 Ash came about for three reasons -- I wanted a level 50 dominator, Darkness Control was still very new, and there was a double experience weekend happening.  I didn't put a lot of other thought into the character, but she was 50 within a week thanks to the DXP boost.  I had similar problems with doms that I did with conotrollers -- they were very powerful when built and played right, Ash could confuse any single enemy guaranteed, but overall the style of play didn't satisfy me that much.  She was basically a perma-dom and darnkess control was a good set, but I only played her when it was a good idea to bring someone with holds, like on a Lady Grey Task Force run.  I was never very enamored with the name either.  The darkness dog barked a lot to, I named my Barky McHowl, and I wrote a song abut it:


Broken tip in Talos Isle, I headed' for the train,
Feelin' a dire need for some X P.
Barky knocked a warrior down, just before the hill;
Drug a gang of sword freaks back to me.
I flashed my fearsome stare and started shooting elite slashers,
And was firing holds while Barky jumped around.
With them broadsword swingers slashin' me,
And Barky breathing black,
We finally planted every warrior in the ground.

Freedom's just another word for playin' without pay:
Premie ain't got nothin' but it's free.
Barking loud comes easy, Lord, when my pet starts to growl.
Barky's bark is loud enough for me;
Loud enough for me and Barky McHowl.

From the streets of Steel Canyon to the Cimemoran sun,
Barky barked his his head off every night.
Standin' right beside me, Lord, through every ITF run,
Barky barked at everything in sight.
Then somewhere in a Lady Grey, Lord, I let him slip away,
Chasin' a runner into another riot.
And I'd trade all my dark control for a pet that didn't bray,
Stoney's ugly, but at least he's quiet.

Freedom's just another word for playin' without pay:
Barkin's all that Barky does for me.
It gets pretty noisy, Lord, when my pet barks and growls.
Barky's bark is loud enough for me;
Loud enough enough for me and Barky McHowl.