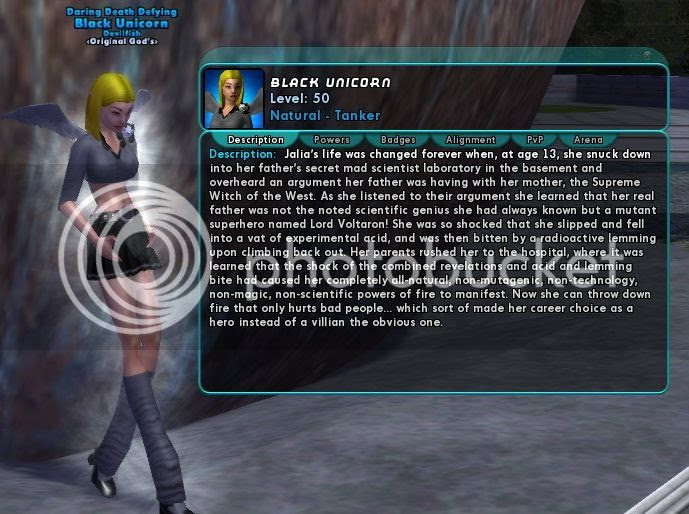 My first character ever was Organica -- but my first level 50 (and only in the first year and a half I played) was Jalia, on Pinnacle, who later became Black Unicorn on Freedom.  This was in the days when fire tanks were giants and could heard and burn down anything.  Organica was already in the 30's when I decided I really needed a fire tank, and I created Jalia and went to town.  It was a slower road to 50 back in those days, even with massive PLing and farming going on, which I did participate in.  At the time Jalia hit 50, I had never had a top-level character in Everquest or any other game I played outside of Toontown, so it was fun to feel like I was now part of the elite crowd.  I did two old-style hami raids with her, but there really wasn't a lot she was good at in the old school hami raid.

She was a fire/axe tank because I thought the way tanks tossed their axe from hand to hand when taunting was cool.  She was very short though, which became a problem because with all of my fire shields on I was nothing more than a ball of fire.  I had a long hatred of defensive power sets that made it hard to see my character -- one of the great things about the game City of Heroes was being able to look like whatever you wanted to look like, and it was important that I could see my character and others could see me.  Ultimately this is why my stone tank Obsidian Butterfly and my stone brute Rocker never made it past about level 32, having to use Granite really sucked, and although I had a level 50 dark armor brute I didn't enjoy playing her, and I wasn't such a huge fan of kheldians for the same reasons.

I moved Jalia from Pinnacle to Virtue but still never played her, then moved her to Freedom so I'd have a level 50 for hami raids there.  I think I took her on one or two hami raids total on Freedom -- these were the new style ones.  After that I had gotten my scrapper named Jalia up above 45 and used her for Freedom hami raids.

Freakylicious had a fire/axe tank and encouraged me more than once to IO Black Unicorn and use her to farm, which he did with his tank.  But to the end, she remained my one level 50 who was entirely outfitted with SO's (and a few hami-O's.).  I never found the time too rebuild her or play her again.
Posted by Miko at 11:48 AM