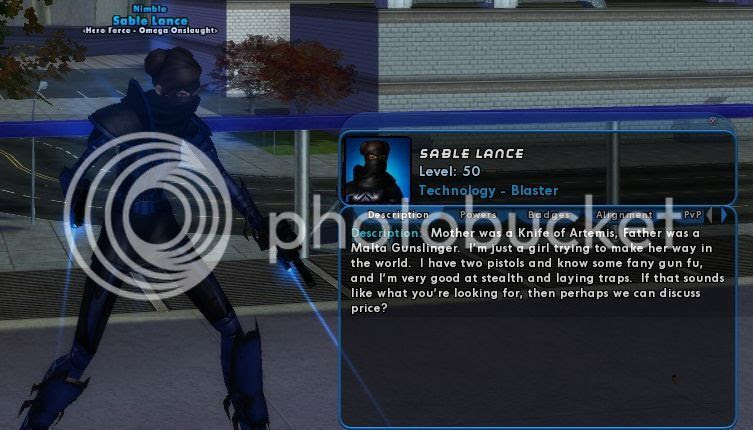 At some point while I was still a member of Hero Force and Multiple Girl II was still active, he decided to create a "static team", ie one that met regularly (I think it  was Tuesdays and Thursdays) and did everything together.  Sable Lance was my character for that, a dual pistols / devices blaster and my second blaster to ever get to 50.  I would have never made it to 50 on this character if not for being in a regular team, because dual pistols was a less than stellar performer, especially against enemies that resisted smashing/lethal damage, and devices was just a sad secondary.  It had a couple of powers that performed really well, a couple that could perform adequately under the right circumstances, and a few powers that really weren't worth even looking at.  All in all, the character was painful to solo on those few times when I chose to do so.  Devices was a relic from the past, something that worked well in the early years of the game when things were harder and you might pull a lot more and take the time to set up trip mines and the like, but the game in the latter years was a high-powered smash bash steamroll style game and there was usually no place for anyone to try laying down some trip mines.

The whole "static team" thing was kind of fun but also frustrating, since it's hard to get everyone together on a regular basis like that.  I wanted to earn merits on my characters, but that meant I had to be running the same missions at the same time, which did not work well if you missed any part of a given play session.  Some of the people who signed up for the thing dropped out early or showed up rarely, but at least four or five of the group made it to 50 I think.

But yeah, this was another character that I got to 50 and then pretty much ignored, except to market.  I was not encouraged to make any more blasters.
Posted by Miko at 5:36 PM