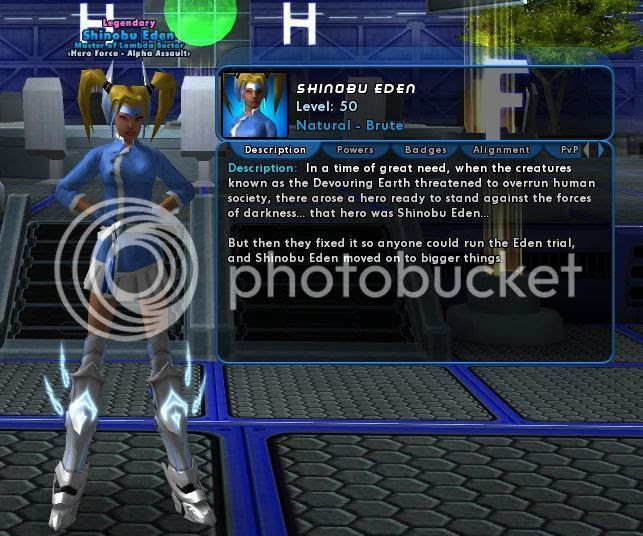 I created Shinobu Eden for a specific purpose.  Multiple Girl II loved to run all the old TFs and trials in the game, including Eden occasionally, but for most of its existence Eden was bugged.  You had to be level 39 to join it, but anyone higher than level 41 could not start it.  Ideally, you needed someone who was exactly level 41 to get a good Eden Trial going.  We'd run into this problem more than once when deciding on the spur of the moment to start up an Eden Trial, and thus I decided to create a character who I could level lock at 41, whose only purpose was to run Eden Trials.  It had to be a new character because most of my characters were ones I hoped to get to 50 some day.  That's why I essentially made a clone of Sailor Shinobu, only a brute with footstomp instead, which was better.

We ran exactly one Eden Trial where I used Shinobu Eden for her intended purpose.  It did not go very well, although we did eventually finish.  MG swore that he hated Eden Trials, and we didn't run another for a long time.

Then the Eden Trial got added to the list of Weekly Strike Targets, which meant that they finally had to fix the bug.  They did so, and anyone above level 39 could now start the trial, even a level 50.  This made Shinobu Eden obsolete -- but this was around the time that I had decided I needed more brutes at level 50, so I turned experience back on and soon had her at 50.  A revamped IO build later, she was one of my toughest brutes of all, able to tank every bit as well as Sailor Shinobu had.  I really liked Shinobu Eden, and never really played Sailor Shinobu again.

Shinobu Eden was in charge of the main division of Hero Force (Hero Force - Alpha) for probably more time than the actual leader Power was.  I kind of liked having my brutes in charge of the various SGs that I created or inherited.  Brutes made good leaders.  I used Shinobu Eden on hami raids sometimes, and on ITFs and STFs.  She was tough as nails.
Posted by Miko at 4:45 PM