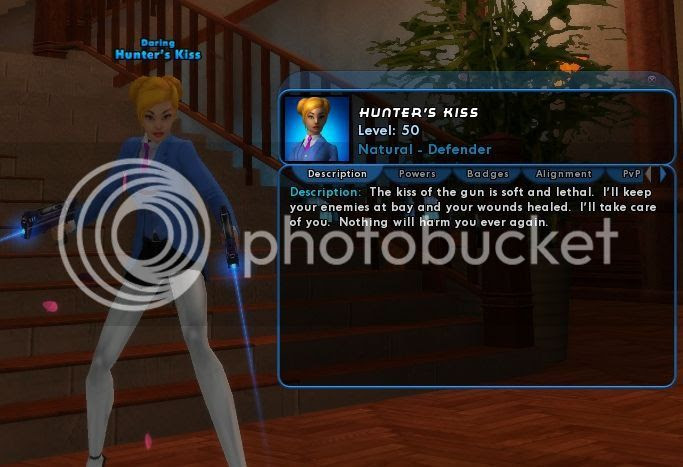 Hunter's Kiss is one of those characters that probably didn't need to exist, because I never really played her.

During most of the big AE exploit farms, the "meow" farms and "bubble" farms, I never set foot inside AE.  But I can't claim to have never PL'd.  To start with, one of my fifties gained more than a dozen levels on Winter Lords in the first year of the game, and my first 50 fire tank gained levels in 5th Column warwolf farms, so I had an early start on PLing.  But nothing matched some of the early AE exploits.  Even the few I did participate in, I only did it for a few levels, generally speaking.

Hunter's Kiss is the exception.  I purposefully set out to PL a character from 1 to 50 on AE boss farms, and that's what I did.  She's an empathy / dual pistols defender, so I was probably somewhat useful n the farms, but basically, I went to 50 in a few days or maybe a week of joining boss farms.  I got to 50, IO'd her, and... well, that's it.  I think I played her once or twice after, then I moved her to Exalted to make room for another
character.

I still like the look of the character I guess, and I liked the name, and I probably could not have gotten an empath to 50 any other way.  That's about all there is to say about her.